KUTZTOWN, Pa. – Anthony Lee of the Kutztown University men’s basketball team suited up in Maroon and Gold one more time on a national stage, as Lee was selected by the National Association of Basketball Coaches (NABC) to play in the Division II All-Star Game on Friday, March 29, at 7 p.m. at The Ford Center in Evansville, Ind., site of the 2019 NCAA Division II Elite Eight. 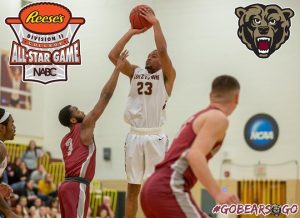 Lee is just the second player in program history to play in the prestigious game, joining Josh Johnson.

The teams are composed of 20 senior student-athletes from each of the eight regions and each earned first team All-District honors.

The coaches for this year’s game have both been prominent figures in NCAA Division II history. Former Kennesaw State and Dalton State head coach Tony Ingle guided Kennesaw State to a national title in 2004 while University of Indianapolis head coach Stan Gouard, a two-time NABC Division II player of the year, led the University of Southern Indiana to a NCAA national championship in 1995.

In his last game playing for the Golden Bears, Lee recorded his first career triple-double and the first one for Kutztown since Stephen Dennis back on Dec. 2, 2009. He finished with 21 points, 11 rebounds and a career-high 10 assists, and also added two blocks and one steal and never left the court, playing in 40 minutes of a Pennsylvania State Athletic Conference (PSAC) Quarterfinal round defeat at East Stroudsburg.

The Willow Grove native ended the 2018-19 campaign scoring 822 points, the most by a player in a single season in program history. Lee reached double-figures in points his last 59 straight games.