ANNVILLE, Pa. – Behind notching her 200th career point on Saturday, senior Sophie Bass was named MAC Commonwealth women’s lacrosse offensive player of the week, announced by the Conference on April 1. 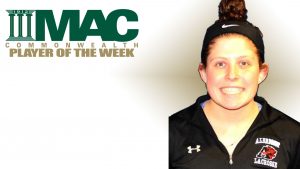 Bass became the third player in Albright Lions women’s lacrosse program history to reach the 200 career point milestone in the Lions 19-7 win over Alvernia on Saturday. In addition to the milestone, Bass led the Lions to a pair of wins behind tallying 11 points on six goals and five assists. She opened the week by posting four points on three goals and one assist in the Lions 13-2 win over Arcadia last Wednesday. Bass then registered seven points on three goals and four assists against the Golden Wolves on Saturday to record the milestone. She also tallied six draw control wins, five caused turnovers, and four ground balls during the week of play.

The Westfield, N.J. native ranks in the top 10 in the MAC Commonwealth for the four major offensive statistical categories. Bass is tied for the third in the conference with teammate Kelly Baumann in assists per game at 2.30, while ranking fifth in points per game at 5.00. She also ranks 10th in the conference in goals per game at 2.70. This is the first time in her collegiate career that Bass has earned MAC Commonwealth offensive player of the week honors.

The Lions return to action Wednesday, April 3 when they will travel to face Lycoming in MAC Commonwealth play at 4:30 p.m.