Freyberger honored by DAR with Women in History Award 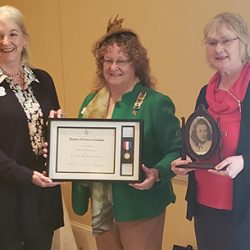 In celebration of Women’s History Month, the Harrisburg Chapter of the Daughters of the American Revolution (DAR) honored Dr. Ruth Matilda Freyberger on March 14, 2019, with assistance Marilyn Fox, representative from the Penn State Berks Freyberger Gallery. Fox provided an overview of Freyberger’s life and how her legacy endowment to Penn State Berks has been used to establish an art gallery in her name.

Freyberger holds the unique distinction of being the first women to earn a Ph.D. in Art Education from Penn State University. Her love of painting began when, at age 13, she injured her leg in gym class. Since she could not participate, she was allowed to take extra art classes. After high school she went on to earn a degree from Kutztown State Teachers College and a master’s and doctorate degree in Art Education from Penn State University. She taught in New Holland, Huntingdon, and Hershey, Pennsylvania, and she went on to have a distinguished career at Illinois State University, where she taught art education from 1951 until her retirement in 1983. She eventually decided to return to Reading and live in the house that her father built.

During her career, Freyberger received many awards including the national McFee Award from the Women’s Caucus of the National Art Education Association.

Freyberger passed away in 2002, leaving an estate gift to Penn State Berks of nearly $1 million. The funds have been used to establish an endowment for the Freyberger Gallery and art collection on campus. The endowment will also be used to fund new acquisitions, promote exhibits and art-related events, and make physical improvements to the gallery as needed.

Original artwork by Freyberger, ranging from watercolors and oils of architecture and cityscapes, to figures at the farmer’s market, to abstracts and florals, has been featured in dozens of exhibitions. Many of Freyberger’s paintings can be seen around campus.

Freyberger left a lasting legacy as one of the true leaders in the world of art and art education.

About the Daughters of the American Revolution

The Daughters of the American Revolution was founded in 1890 with the mission of promoting historic preservation, education, and patriotism. The Harrisburg Chapter was founded in 1894, and will locally continue to preserve the legacies of our Founding Fathers and the Patriots who fought so bravely for the independence of the United States of America. In May 2019, the chapter will celebrate our 125th year and the launch of a chapter history including 60+ Revolutionary War patriot biographies.