Schmidt Honored as PSAC Athlete of the Week

LOCK HAVEN, Pa. — Kutztown University senior Lauren Schmidt was selected as the Pennsylvania State Athletic Conference Lacrosse Athlete of the Week on April 2, for the first time in her career. 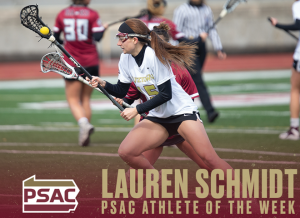 The midfielder from Hanover, Pennsylvania registered a career-high nine points –including the 100th of her career– on six goals and three assists as KU defeated Shippensburg, 15-6, last Wednesday. Schmidt also had four ground balls in the contest.

Schmidt would contribute a pair of goals, an assist, three ground balls, two caused turnovers and a career-high eight draw controls in Saturday’s 15-9 win against Gannon. The eight draw controls are tied for sixth most in a game in program history and the victory extended Kutztown’s winning streak to three games, it’s first such streak since 2017.

Schmidt is averaging better than three points per game this season and is second on the team with 25 points. She’s tied for the team lead in goals (19), while ranking second in draw controls (24), third in caused turnovers (10) and fourth in ground balls (16).