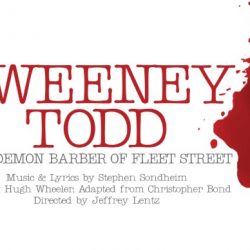 “Sweeney Todd” has been the subject of a novel, a 1979 musical thriller and a major film (directed by Tim Burton and starring Johnny Depp). It has been acclaimed as one of the greatest achievements of the American musical theatre.

Written by Christopher Bond, “Sweeney Todd” tells the disturbing tale of a Victorian-era barber who returns home to London after 15 years of exile to take revenge on the corrupt judge who ruined his life. When revenge eludes him, Sweeney takes vengeance on the entire human race by murdering as many people as he can. That’s when business starts booming for Sweeney’s associate, the industrious Mrs. Lovett, who bakes bodies into meat pies and sells them to the unsuspecting public.

The play features some of the most hauntingly beautiful music ever written for the stage, and will be performed by Albright’s Domino Players — recently named a winner of 10 national Kennedy Center American College Theater Festival awards, after receiving a standing ovation during an invited Festival performance of “A Raisin in the Sun,” in January.

Tickets for performances by the Domino Players are available online or from 10 a.m.-2 p.m., at the Center for the Arts box office (610.921.7547). An after-hours cabaret will follow the April 13 performance on Alumni Weekend.