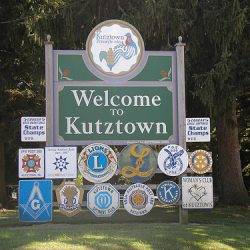 KUTZTOWN, PA – A new Hampton Inn and Suites is under construction near Kutztown University, and the $13 million building is set to open in 2019.

KU Foundation’s investment firms, Ursus Aureus and Gold Bear Ventures, started construction for their Hampton Inn and Suites in August, 2018, said Ed Richmond, the Associative Executive Director of KU Foundation. They are constructing the hotel about a half-mile from KU’s campus at 15180 Kutztown Road, where the demolished Campus Inn once stood.

The $13 million, 64,000 square-feet Hampton Inn and Suites will be four stories, consisting of 100 rooms, an indoor pool, and conference and fitness rooms, said Richmond. A Hilton brand, the hotel will be the first nationally branded hotel in the area.

KU Foundation saw a new hotel in the area as a lucrative investment for KU to expand, said Richmond. They hope to give students more opportunities, funding scholarships, helping the university cater to visitors, and aiding events at KU. It will also help with the Kutztown region’s local events and festivities, such as the Kutztown Folk Festival.

“We wanted someplace nice for KU student’s parents to stay,” said Richmond. “We saw it as an investment to expand KU and the surrounding area.”

KU Foundation has a near $31 million and growing endowment. This will play into their driving motivation, to help fund scholarships for students who would otherwise drop out from lacking funds, said Richmond. They will also help the university and students as a whole.

“I have mixed feelings on it,” said Patricia Dyson, an alumnus whose son will attend KU next year. “It might ruin Kutztown. It should be outside of it. It kinda messes up the small town vibe it has going. But I can see why they’re doing it. It could really help the school.”

“When we first thought of the idea of investing in a hotel, it was a no-brainer,” said Richmond. It would be good for students, KU, and the community.

The Foundation first thought of the idea for a hotel in the area back in 2015, to diversify their investment portfolio, said Richmond. Sometime after that meeting, they purchased the land where the Campus Inn was.

In August, Ursus Aureus and Gold Bear Ventures paid for a groundbreaking event in order to celebrate the beginning of construction. “It will be a great opportunity for the campus relations to expand,” said Heather Hausman, the Director of Catering for Aramark on campus, and who organized the groundbreaking ceremony luncheon at KU’s Georgian Room in August.

The Hampton Inn will be designed with a local flair in mind. They intend to remain consistent with the area’s iconic Pennsylvania-Dutch and German-American aesthetics. They want to blend into and promote the rich, cultural traditions long-held in Kutztown, said Richmond.

After a long-standing dispute over Kutztown and Maxatawny township and their sewage treatment plant, the two finally reached a resolution. This granted passage for the Foundation to get clearage for sewage service to the prospective hotel.