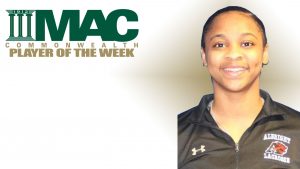 Mason helped lead the Lions to a perfect 2-0 week behind wins over Lycoming and Messiah On Wednesday, Mason made nine saves on 16 shots faced, picked up five ground balls, and allowed just five goals in the Lions 20-5 win over the Warriors. She followed that up by helping to deliver the Lions first win in program history over Messiah on Saturday afternoon by making nine saves on 26 shots faced. She came up big with back-to-back saves with just over two minutes left in regulation to keep the game tied at the time.

The Darby Township native currently ranks second in the MAC Commonwealth with 8.64 GAA, and ranks fifth in saves per game at 8.75. Mason also ranks second in the conference with a .533 save percentage. This is the fourth time in Mason’s career, and the second time this season that she has earned defensive player of the week honors.

The Lions will return to action Wednesday, April 10 when they will travel to face Widener in MAC Commonwealth play at 7 p.m.