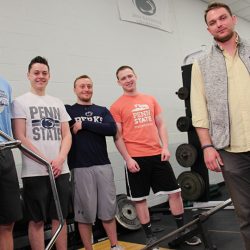 WYOMISSING, PA– Masen Suhadolnik has been lifting weights since high school. Between sets, he would sometimes notice other people in the gym not lifting properly, and he wanted to help. But it wasn’t until he became a senior in the Electro-Mechanical Engineering Technology (EMET) degree program at Penn State Berks that he discovered a way to combine his love of weight lifting, his knowledge of engineering, and his desire to help others.

When Suhadolnik and four of his fellow engineering students were enrolled in the senior capstone design course, he suggested that they create something that he had wished existed for a long time–a sensor that attaches to a barbell and gives real-time feedback on performance indicators such as velocity, acceleration, and displacement of motion.

The team has adopted the name “Vytah-Fit” and it includes Suhadolnik and four other senior EMET students: Karl Bruhn, Bradley Owens, Ricky Romaniello and Tobias Welk. Suhadolnik explains, “We all come from athletic backgrounds. I played a few sports in high school but now I concentrate on power lifting and bodybuilding. But Tobias Welk plays baseball here at the college and Bradley Owens plays ice hockey here. Ricky Romaniello was a wrestler in high school and Karl Bruhn was a big cross-country runner in high school. Everyone is bringing their own past and present athletic experience into developing the product.”

“We created this device to warn the user against improper form based on their personal data and based on the bar path of the exercise. And we want to give the user parameters, such as their speed, velocity, acceleration, and displacement. Then hopefully our product can help them to adjust so that they can lift with the proper form.”

As the team worked on the project, faculty at the college took notice and encouraged them to think about developing a business plan to further develop and market the sensor.

Dr. Marietta Scanlon, Assistant Teaching Professor in Engineering, was the first to assist the team with materials and properties as they developed the sensor, and then she got them thinking about the business aspect of the project. Currently the team is working with Scanlon to prepare for this year’s Inc.U competition, sponsored by Penn State’s Pennsylvania Technical Assistance Program (PennTAP). As one of six finalists, they earned a spot on WPSU’s “The Investment” television show where they will pitch their idea in a “Shark Tank”-style format to a panel of judges for a chance to win investment funding. The show will air on WPSU-TV on April 6.

“The support from Penn State has been overwhelming,” comments Suhadolnik. “We’re working with the Happy Valley LaunchBox on IP agreements, cooperating agreements set up for the LLC–all the business aspects that we don’t really know that much about.”

The team has also been working with the Penn State Berks Idea TestLab, which offers startups free access to other entrepreneurs, faculty members, business owners, venture capitalists, members of the community and many other resources. Part of the Penn State Berks Flemming Creativity, Entrepreneurship and Economic Development (CEED) Center, the Idea TestLab further expands the University’s strong emphasis on entrepreneurship programs.

The Lab’s lead faculty members include Dr. Sadan Kulturel-Konak, Professor of Management Information Systems, and Abdullah Konak, Professor of Information Sciences and Technology. Kulturel-Konak is also the director of the Flemming CEED Center and the coordinator for the Entrepreneurship and Innovation (ENTI) minor. The Idea TestLab has been developed as part of the National Science Foundation (NSF) I-Corps initiative at Penn State. NSF established the program based on the Lean LaunchPad, an entrepreneurship methodology to test and develop business models based on querying and learning from customers, explained Kulturel-Konak.

The “graduates” of the Idea TestLab will be eligible to compete for a NSF micro-grant of up to $3,000, and then they become eligible to apply for an I-Corps National Teams $50,000 grant to develop their business models.

Suhadolnik  explained that the Idea TestLab was crucial in customer discovery and building the beginning stages of their business canvas.

When asked what the team would do with the profits from the Inc.U competition or the Idea TestLab, Suhadolnik said that they would invest in research and development. On a personal note, project recognition would have a deeper meaning for him.

“My personal reason for developing this product is I love weight lifting, and I want everyone else to love weight lifting. And the best way to look at it is there’s no better feeling than knowing that you’re doing something right, and you’re getting better and better at it. So the greatest feeling for me is not only hitting a new personal record in the gym, but watching other people continue to strive and succeed. I could say for the rest of my team–that’s their personal motivation too.”

“The Vytah-Fit team has done a great job turning their EMET capstone project into a business. We’re fortunate at Penn State Berks to have a group of faculty who encourage students to pursue their ideas and provide them with the support they need through the Berks LaunchBox and the CEED Center,” Scanlon summarizes.