Researched and written by Richard Polityka for Berks History Center 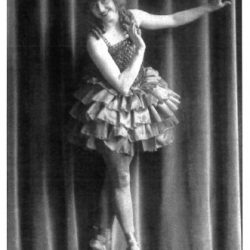 By her own admission, Pearl Haines never worked a day in her life. She was born to entertain and share her joy of performing with young people willing to follow in her footsteps of dance and entertainment. The work she did was more than a source of income; it was her passion. She was a long-time dance instructor for 54 years, with most of that time spent at her dance studio at 108 South 6th Street. She touched the lives of many with her dance instruction and became a name that all in Reading knew well. 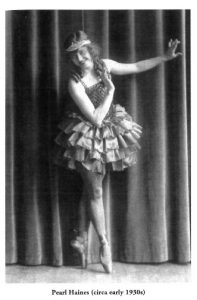 Pearl Haines was born on July 17, 1899 in Reading, PA to William and Catherine (Yoder) Haines. By an early age it was clear that entertaining people was in Miss Pearl’s blood. At age 3, she made her first public appearance when she recited a poem at a Sunday school rally at St. Marks UCC on 211 Greenwich St. Dance lessons soon followed at the age of 6 with Professor (Pappy) Drexel at his studio in the rear of 1144 Perkiomen Avenue. Her early years were formative in her development in theatre -First as the lead in “Alice in Wonderland,” which was performed at the Orpheum Theatre on August 28, 1908. Miss Haines performed as Alice many times in her early career at both the Orpheum and Academy of Music, which prompted children to call out “Hello Alice” when they saw her riding on an open trolley car.

Later, she was cast as the lead in “Dream of Mysticland” as “Little Miss Nobody” to highly favorable reviews. More performances followed in the ensuing years at the Rajah Temple at Pearl and Franklin Streets, The Orioles Home on South 9th Street, Redmen Hall on Walnut Street and the Hippodrome on Penn Street. By 1914, she was a shining star on the theatre and recital scene in Reading, where she was the featured attraction to the delight of audiences citywide. Theatre-goers simply could not get enough of the charismatic young Haines, as she performed with her Juvenile Minstrels as the featured attraction, gaining headlines for the reviews that followed in the daily paper. By 1915, everybody in the city knew of Pearl Haines.

Pearl opened her first dance studio at the Moss and Marion Fire Hall in 1915 at the age of 16. For a young girl who was still in school, she kept an active social schedule performing in theatres and halls to large audiences and taught dance to young children, who emulated her with the desire to follow in her footsteps. It was at this time she met a young Irene Burkhart, who would accompany Miss Haines as her pianist for 35 years. As the popularity of her dance classes increased, Haines dance studio was moved to its long-time location at 108 South 6th Street. This was the location behind her home that Pearl Haines established herself as a dance instructor to thousands of young children.

Pearl continued to work as a dance instructor and entertainer into the 1920’s, when she was cast as Fi-Fi in the comedy “Fi-Fi of the Toy Shop” in a Rogers Company of New York production.  The production was performed to a large crowd at the Rajah Theatre for the benefit of St Mary’s Episcopal Church, which had been damaged by fire.

By 1927, a great adventure awaited Miss Pearl Haines. She hired an agent, George Hamid, and proceeded on a 14-year summer tour of county fairs up and down the Eastern Seaboard as the Pearl Haines Revue. Her dance revue was known as “Polly and her Polly-Anns” and they performed as part of the price of admission in front of the grandstand. Newspapers advertising their local county fairs consistently listed the “Pearl Haines Revue” as one of the featured acts in their promotions. They started with a rented truck, which eventually grew to a 5-ton truck, to carry props, scenery, floodlights, and  a tent with a kitchen, dining room and dressing room. Accompanying the troupe was Pearl’s mother Catherine, who cooked meals and made all the costumes. Five girls in the company took turns assisting Catherine. Mr. Hamid dubbed them the “Biggest Little Show on Earth.”

In 1934, Pearl’s troupe sailed to San Juan Puerto Rico to perform at the Gran Feria Exposition de Puerto Rico, making the revue the first dance group from Reading, Pa to travel overseas. During this trip Pearl and “Polly Ann” Marie Shalter were invited be on a radio program to sing a duet while Pearl played a marimba solo. They also saw President Roosevelt as his parade passed by their hotel balcony! Pearl and the Polly-Anns greeted him with a “Hi Frank!” He looked up and waved and gave a big smile. Another memorable moment was in 1938, when a young photographer asked if he could take a photo of the girls relaxing between acts. Later they discovered he was a photographer from Life Magazine and they made the September 26th edition.

During her travels, Pearl Haines was very well-known in Reading. Between the success of her dance studio, her adventures working county fairs from Canada to Florida, and her performances in the theaters of Reading, Pearl Haines was a local celebrity. Her picture appeared as a feature act in the daily entertainment news next to a photo of Cary Grant and her name was mentioned in the same articles as John Barrymore and Myrna Loy, as she continued to perform around town. From 1936 to 1949, Pearl returned to the scene of her first lead roll when her revue danced in the Civic Opera at the Orpheum Theater. The county fair tour ended in 1941, although the Reading Fair still saw the Poly- Anns. The group even helped Reading celebrate its Bi-centennial with a revue at the City Park Bandshell.

Life changed for Pearl Haines when she married George Horton of Afton, New York in 1952. She met George at the county fair in Afton, where she later started a dance studio. Unfortunately, George passed away in 1958. Following his death, Pearl returned to Reading to live with her mother Catherine. Pearl then began teaching dance at Micky Norton’s School of Dance in Laureldale. Two of her pupils opened their own dance studios and one student aspired to higher success. Robin Miller opened a dance studio and performed in the Court of Ballet at Radio City Music Hall and served as an understudy to the lead dancer in Broadways “West Side Story”.

Pearl Haines retired from teaching dance in 1970, but she remained an active individual. She became president of the Women’s Club of Reading from 1974-1976 and again from 1982-1984. During her first term Pearl presided over the Women’s Clubs celebration of the 200th Anniversary of the Second Continental Congress on May 10, 1975. The event was billed as “A Day to Remember” as the club held a tea dressed in colonial attire to mark the event.

“Your life is God’s gift to you – what you do with your life is your gift to God.” – Pearl Haines in the December 1974 Women’s Club Bulletin 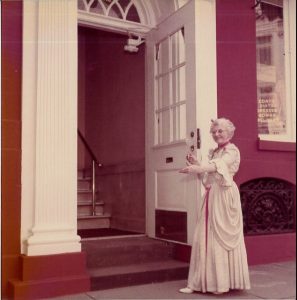 Pearl Haines on May 10, 1975 as she welcomes you to the women’s club for the “Day to Remember” – BHC Research Library Collection

Pearl was an individual who gave her all to the people in her life, especially when she taught and entertained. Pearl Haines passed away at the age of 96 on January 18, 1996. As famous as she was in her time, she never became wealthy, but in her own words she had everything she wanted:

“You could say I’m a millionaire with friends.”