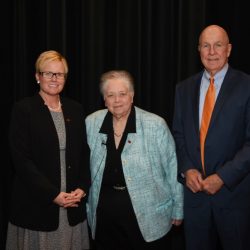 “Dr. Richard Kratz and Dr. Anna Weitz both provided many years of distinguished leadership and service to RACC and to our students. Having invested so much of themselves in RACC, the board of trustees deemed it only fitting to make their names a permanent part of our campus, not only to recognize their efforts but to inspire others,” says RACC Board of Trustees Chair Mr. Guido Pichini.

Schuylkill Hall, now Kratz Hall, was originally built for and occupied by Penske Truck Leasing. In 2005, after expanding their operations to a larger facility, Penske sold the property to RACC. On March 9, 2005, the building was named Schuylkill Hall. Today, the building serves as a focal point for community education, career programs and workforce training.

Dr. Richard Kratz, President Emeritus, joined RACC in 1987 as the dean of student services and institutional planning. In 1992, he became the vice president and dean of academic affairs, and finally in January of 2003, he was named the fourth president of Reading Area Community College. Prior to RACC, Dr. Kratz spent eighteen years at Bucks County Community College where he held the positions of director of admissions and records, director of admissions, records and student services and assistant dean of student services. He retired from RACC in June of 2007.

Penn Hall, now Weitz Hall, was built in 1978 and opened as the East Shore Office Building. The building housed a number of federal agencies, an insurance company and a country music station through most of the 1980s. RACC acquired the building in the mid-1990s and eventually converted it to an academic building designated as Penn Hall. Today it houses RACC’s Allied Health Program, Business Division, the Dental Technician Program and CNA Program; as well as clinical simulation labs, computer labs and classrooms.

A local artist, Richard Houck, created the commemorative gifts presented to Dr. Kratz and Dr. Weitz at the ceremony. Mr. Houck has been recognized as an inventive and versatile artist in a variety of mediums with a creative career spanning twenty-five years.