Annville, Pa. (Apr. 15, 2019) – Senior Zack Landy, Senior Emily Gilbert, and Junior Ariana Chuprinsky were named MAC Players of the Week for their performances during the week of April 8 – April 15. 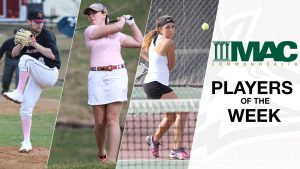 Landy threw a one-hit complete-game shutout against Albright on Saturday in a 7-0 win for Alvernia. Landy allowed just one hit, no runs, no walks, and struck out five batters on the game. Landy allowed his only hit in the first inning, and allowed one other base runner reached on an error in the second. He then faced the minimum over the final five innings and finished with five strikeouts.

Gilbert recorded two more low medalist honors on the season, and led Alvernia to two team titles on the week. The senior shot a 77 to win the Ursinus Invitational at Stonewall, and led Alvernia to a 332 team total and first place finish. Gilbert then followed that up with a 75 at Lebanon Country Club to win the the Lebanon Valley Dutchmen Invitational and lead Alvernia to its second team title of the week with a team total of 333. The senior finished the week with a total of 26 pars and two birdies.

Chuprinsky went 4-0 at No. 1 doubles and No. 2 singles to lead Alvernia to a 2-0 week in MAC Commonwealth play. Chuprinsky teamed up with Amanda Phillips for an 8-5 win at doubles at Lebanon Valley College, and went on to win her singles match, 6-0, 6-4. The duor then won doubles against Lycoming by a score of 8-2. Chuprinsky closed out that match with a 6-0, 6-1 win at singles.