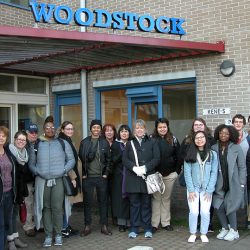 Photo: Members of the Penn State Berks Criminal Justice drug policy study trip to Amsterdam and The Hague pose outside Parnassia Woodstock, an elderly home in The Hague for the addicted who have been unable to cure themselves. The facility is named in honor of America’s 1969 Woodstock Music Festival.

WYOMISSING, Pa. — A group of 18 Penn State Berks Criminal Justice students and faculty members recently spent a week visiting Amsterdam and The Hague to learn about how illicit drug policies of the Netherlands differ from those of the United States and other countries, and how effective they are.

The first-ever overseas study trip for the college’s Criminal Justice majors was organized and led by Associate Professor Dr. Jennifer Murphy, who is the coordinator for the degree program and whose research interests include drug policy and the simultaneous medicalization / criminalization of drug addiction.

Trip highlights included presentations by the Dutch national police, government health organizations, social service agencies and drug testing services; a visit to the International Criminal Court (ICC) in The Hague; and a sampling of Dutch historical and cultural sites, including the Anne Frank House and a 17th century prison.

The trip was part of Murphy’s Comparative Drug Policy course and she explained that she chose the Netherlands for several reasons: It has a dramatically different approach to managing drug issues–harm reduction and tolerance vs. law enforcement and criminalization; it is a country where nearly everyone speaks English; it has excellent public transportation; and its innovative approaches to dealing with drug problems are working.

“The trip exceeded my expectations. I had confidence it would be good based on the success of similar programs guided by the Rotterdam agency we used, EduTravel, which has arranged trips for the criminology program at Penn State University Park and for other American universities. Plus, Penn State has been encouraging embedded travel and provided the support we needed,” Murphy said. “I believe that everyone who was on the trip gained a lot of insight into the impact of drugs on our criminal justice system and learned about strategies that could help combat our current opioid crisis.”

She noted that the Netherlands has developed much more pragmatic programs rather than moral solutions to dealing with drugs–programs that recognize that people will always use drugs and that address what the government should do to eliminate or minimize the health and social problems caused by drug users.

“For example, the Netherlands tolerates the sale and consumption of cannabis in some 500 ‘coffee shops’ that have existed since the 1980s. A coffee shop is an establishment where cannabis may be sold subject to certain strict conditions (5 grams or less daily), but no alcoholic drinks may be sold or consumed. The Dutch government does not prosecute members of the public for possession or use of small quantities of drugs,” explained Murphy.

“However, in the Netherlands as elsewhere, drugs sometimes cause nuisances and can lead to crime. The government has responded by imposing tougher rules on coffee shops and attempting to curb trafficking in hard drugs. On the other hand, addiction treatment is available for those who are addicted to drugs, particularly hard core heroin users who cannot cure themselves.”

Murphy noted the stigma in the U.S. regarding drugs is still incredibly intense. “Holland and other countries have offered clean needle exchanges for 35 years. Pennsylvania still has a ban on such programs.”

Two other significant differences between Holland and the U.S. relate to heroin addiction and the increasing popularity of recreational drugs such as Ecstasy (MDMA), said Ruben Boers, co-founder of EduTravel and an anthropologist and lecturer at The Hague University of Applied Sciences.

Boers said the Netherlands does not have an opioid crisis and, in fact, heroin addiction has been declining in Holland. “Today, the government is helping the shrinking population of heroin addicts by providing shelters, minimal doses for those who cannot cure themselves and counseling to help them finally better their lives. One such shelter has been running successfully since 1998.” He added that overdose deaths in Holland are far less common than in the U.S. due to the free dispensing of heroin.

He also noted that while Holland is the largest manufacturer and consumer of Ecstasy in Europe, the country—in addition to trying to wipe out production—has established programs to protect users and the community. They include on-site medical help at dances, raves and concerts; 24/7 drug testing to identify contaminated recreational drugs; and working with nightlife populations that are likely to experiment with drugs.

While the Netherlands has experienced success with harm reduction and tolerance measures based on the cooperation between the law and prevention programs, 46-year veteran National Police Chief Inspector John Jespers said the battle against drugs remains a day-to-day fight. “Large amounts of drugs are shipped daily into Rotterdam, one of the world’s largest and busiest ports. Most of these drugs thankfully are not being consumed in Holland, but are being shipped elsewhere, made easier by our EU open borders. We are doing all that we can to seize them. Also, we are fighting more immigrant drug dealers with family organizations that operate like organized crime.

“Fortunately,” added Jespers, “cooperation plus multiple monitoring is working for us in the Netherlands. Drugs are relatively pure which prevents a lot of deaths and other issues. We are a pioneer in nationwide drug testing, which allows us to know what we are dealing with every day.”

Kevin Nyce of Downingtown, Pa., a junior Criminal Justice major with a minor in Civic and Community Engagement, said being on the trip “lit a fire inside of me to want to travel with my career, whatever that is going to be,” especially since he had not traveled before this.

One of his best experiences was being able to accompany Dutch National Police from the city of Gouda along with some other tour participants on routine drug trafficking and narcotics prevention patrol to the Belgian border. “I saw the way they conducted a search, questioned the suspects and how they drive on the streets undercover. Police officers in the United States do things much, much differently.

“I hope to do more ride-alongs and network with all different kinds of police in the future to give me more of a perspective into how police officers keep people safe and enforce the Constitution,” Nyce continued. “This trip only sparked my interest in law enforcement and drug policy more. All my Criminal Justice classes were weaving into one and I was able to argue current criminal justice issues and talk about differences in the policy of the U.S. and the Netherlands intelligently with my classmates, professors and our guides.”

Boers and the other EduTravel co-founder, Koos Narold, a social worker, believe strongly in what they are doing and the partnership they have developed with Penn State Berks and University Park campuses.

“Our vision is that an American student is not flying all the way to the other side of the world to just sit in a classroom for a lecture. Students come as explorers, exploring life as it is with its wonderful and dark sides. We believe that a good professional is book-wise and streetwise. True knowledge can be found by combining lectures with field experiences where dialogues are opened with professionals, clients and other experts. We see enthusiastic students on our trips. We see our role as making their life become knowledge,” explained Boers.

Murphy’s recent book, “Illness or Deviance? Drug Courts, Drug Treatment, and the Ambiguity of Addiction” (Temple University Press, 2015), examines a drug court and affiliated drug treatment programs to examine how addiction is constructed in each setting. Her current research is looking at how a person’s framework for understanding addiction influences their opinion on how to handle drug offenders.