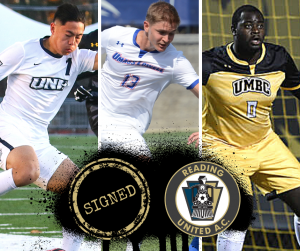 Cheng is a Norwegian forward with a plethora of experience both at New Hampshire and abroad. Prior to joining the Wildcats, the forward played for Skeid Fotball, a Norwegian second division team based in Oslo, primarily spending time with their reserves and U19 squads. He has also spent time on trial with Werder Bremen in Germany and Hajduk Split in Croatia. During his time in the Granite State, he’s primarily been a weapon deployed off the bench, making 31 of his 36 appearances as a late game deployment.

Head Coach Alan McCann had nothing but praise for the forward, saying, “Conrad brings us an element of excitement. He will be a handful for any defender to come up against, and will bring a next level work rate to the group.”

Blaskic comes highly touted from UMass Lowell, the third RiverHawk to join Reading United in recent years (Ivan Abramovic and Jakov Basic both played in Reading during the 2017 season). A 6’4” center back, Blaskic has shown dynamic range during his 50 collegiate appearances, scoring eight goals with five assists. He’s a two-time nominee to the America East All-Conference First Team, including being named 2017 America East Defender of the Year. Ivan’s previous USL League Two experience came with Seacoast United Phantoms in 2017, where he compiled 432 minutes in 10 games, bagging one goal and one assist (both against Reading in an Eastern Conference playoff game).

“Ivan has all the tools to make the jump into the professional game,” added McCann. “Not only does he have the abilities on the field to be a big player for us, his attitude off of the field is already at a professional level.”

Jones comes in with a heaping dose of international and academy experience, part of U.S. U17 National Team residency and D.C. United academy during his youth career. The 6’3” backstop stole the starting spot in net late in his freshman season at UMBC, playing in 13 matches with a 1.05 GAA. With the Retrievers losing four of their previous six games, Jones’ entry spurred them to a late season rally wand an unlikely spot in the conference championship as the #5 seed. Quantrell was named to the America East All-Rookie team for his late season efforts.

“Quantrell is a young talent that we want to push to see just how far at the next level he can go,” stated McCann. “As a commanding figure in goal, we are looking forward to having him in.”

Reading United’s 24th season kicks off with a U.S. Open Cup First Round matchup against NPSL-side Philadelphia Lone Star on May 8 at 7 pm, hosted by Alvernia University. The first USL League Two home match-up will be over two weeks later, as the Blue and Gold take the field against F.A. Euro on May 25 at Wilson High School. Season tickets are on sale at readingunitedac.com/tickets.