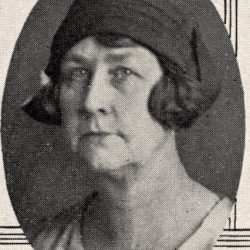 “Her life was dedicated to the Common Man.”–These words are inscribed on Lilith Martin Wilson’s tombstone in Aulenbach Cemetery. Wilson was the first woman elected to the Pennsylvania State Legislature from Berks County. She also was the first woman to run for Governor of Pennsylvania, in 1922. Arriving in Reading just a few years after women earned the right to vote, Wilson was already well-known member of the Socialist Party in the US.

Lilith Browne was born on September 13, 1886 in Dublin, Indiana. Not much is known about her early life in Indiana. From Census records available online, it looks like the Browne family moved around Indiana, before settling in Anderson, Madison County. On September 14, 1903–the day after her 17th birthday–she married George Springer Martin in Anderson. Later, she was educated at The Rand School of Social Science in New York. Formed by members of the Socialist Party of America in 1906, it taught both traditional humanities coursework and served as training center for socialist theory (“Guide to the Rand School…”).

Before coming to Reading, Lilith traveled around the US lecturing on socialism and acting as a party and campaign organizer. According to the Coshocton (Ohio) Morning Tribune, Lilith had been contracted by the Pennsylvania State Socialist Association in May 1915 to lecture around the country. In 1920, she was living in New York and was a speaker at the Indiana State Socialist Convention (Indianapolis Star, May 22, 1920.) Ancestry.com has a number of articles that detail her travels around the US lecturing on Socialism. The Ogden (Utah) Standard Examiner described her as an “earnest, forceful speaker”–obviously, she had made a name for herself as an ardent advocate for Socialist ideals.

She moved to Reading in 1921 to support Socialist campaigns in Reading and Pennsylvania on behalf of the Socialist Party. She had been elected that year to the National Executive Committee of the Socialist Party (“History of Women in the PA House”). She married L. Birch Wilson, also a Socialist and later Reading City Controller, in October 1921. Even though Lilith Wilson was a  prominent Socialist in her own right, author William C. Pratt proposed that her prominence and successful elections were due in part to being the wife of well-known Socialist (Pratt, 81).

In 1922, Wilson was nominated to be the Socialist Party’s candidate for Pennsylvania Governor. According to the Pennsylvania Manual, 1921-1922, Wilson lived at 521 S. 15th Street in Reading. She was one of fifty women running on major Pennsylvania tickets in the 1922 election. She won more than 30,000 votes, and came in third after Gifford Pinchot (the winner) and John A. McSparran (who won Berks County). The next year she ran for Reading School Board and lost (Pratt, 80).

According to William C. Pratt, by the late 1920s, the Socialist Party in Reading was having trouble getting both men and women to vote. A special effort was made, though, to appeal to working-class women. A tax assessment and increase in 1927 hit a nerve with Reading women and attendance at the regular meetings of the Women’s Socialist League increased (Pratt, 74). In 1928, Lilith Wilson was named the chair of the Socialist Party’s new National Women’s Committee.

After unsuccessful local elections, Wilson ran for the State Legislature in 1930 and won. She was the first woman elected to a state office from Berks County, as well as the first Socialist woman elected to any legislative body in the United States. She was reelected in 1932 and 1934. Various sources site her causes as women and children’s rights, workman’s compensation, a minimum wage, health care, and pensions.

Lilith Martin Wilson died in the Wernersville State Hospital on July 8, 1937. She was unable to finish her third term, due to poor health. It is hard to know what Wilson’s political career would have been like in the late 1930s. According to William C. Pratt, the local Socialist movement faced a fight between the “Old Guard” Socialists and the new “Militant” members. Other Socialist groups seemed to break up or dissolve by then. The Women’s Socialist League actually reorganized amid the Party’s chaos in 1941; however, Socialist women in Berks County and nationwide were relegated to support positions and few were actually elected to higher office.