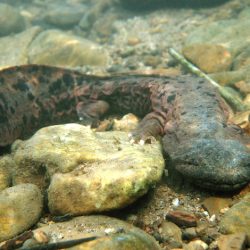 Senate Bill 9 officially designated North America’s largest salamander as the official state amphibian. The two-year effort to win that distinction for the hellbender was led by students who have studied the salamanders and wrote the bill.

Emma Stone, president of the Chesapeake Bay Foundation’s Student Leadership Council in Pennsylvania, said more is at stake than recognition of a unique species.

“This designation will serve as a clean-water legacy here in Pennsylvania,” she said. “Hellbenders need cool, fast water that is obviously clean. Our hope is that this will give us cleaner water throughout the Commonwealth.”

The loss of tree cover along many stream banks has degraded hellbender habitat and drastically reduced their numbers in streams where they were plentiful just 30 years ago.

Stone said trees not only shade the water from the sun but also stop sediment and pollution from reaching streams.

“Having very vegetative riparian buffers helps aid that,” she said, “and so our hope is that there will be more efforts for streambank restoration.”

In 2017, the Department of Environmental Protection reported almost 20,000 miles of environmentally impaired rivers and streams in Pennsylvania.

While designation as the state amphibian doesn’t bring any legal protections for the species, Stone said, the legislation and the student efforts that brought it about have put a spotlight on the hellbender as an indicator of the health of Pennsylvania’s waterways.

“Our hope,” she said, “is that, in turn, there will be more of an awareness and more of a care and a drive to save the species.”

More information is online at cbf.org, and details of SB 9 are at legis.state.pa.us.