Reading adds two from Manhattan; one from Fairfield to 2019 USL League Two Roster 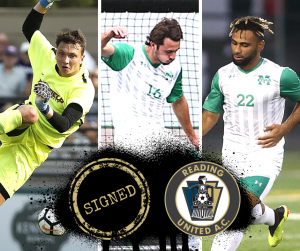 READING, PA (April 22, 2019) – Reading United will add three new players hailing from the Metro Atlantic Athletic Conference, as they continue to add players ahead of the 2019 season. Fairfield’s Gordon Botterill and the Manhattan pairing of Callum Carsley and Adrien Awana will be joining Reading this summer, pending league approval.

Botterill brings another imposing presence in net – much like last season’s pairing of Ben Lundt and Bennet Strutz. The 6’5” keeper has earned All-MAAC honors the past two seasons, including All-MAAC First Team and United Soccer Coaches All-East Region team accolades this past season. Fairfield has won two consecutive MAAC Regular Season Championships behind Botterill’s netminding, as the backstop has a 0.97 GAA and 13 shutouts to his credit over his 35 appearances. The Swiss goalie comes with USL League Two experience, starting five games for AC Connecticut during their 2018 campaign.

“Gordon comes in off the back of a solid showing at the college level,” said Reading head coach Alan McCann. “Coming into the environment here, he is looking to push on a level or two and become a leader at the back for us.”

Carsley comes into Reading with a solid pedigree of USL League Two and NPSL experience, spending 20 games with South Florida Surf (2016, 2017) and the bulk of the 2018 summer with Palm Beach United. Eager to return after missing his entire collegiate season due to injury, the 6’3” defender had a solid junior season. Carsley led Manhattan in shots as a defender in 2017, converting on three goals while adding a team-high five assists. Callum is the son of former Everton and Ireland National Team midfielder Lee Carsley, who is currently specialist national coach for the England U21 team.

“Callum is one we have tracked over the last couple of years in the former PDL,” added McCann. “Although he comes to us predominantly as a defender, he will help us going forward as well, and can provide real quality.”

Awana is crossing over from United rival New York Red Bulls U23, where he played in four games, including a 38 minute stint against Reading United in the PDL Eastern Conference Championship. A 2018 All-MAAC First Team selection, Awana made his presence felt for Manhattan in critical situations, as three of his four goals were game winners. Prior to arriving in the Bronx for his junior year, the French defender attended Universitie of Bordeaux and played club ball with Stade Bordelais and AJ Auxerre.

“Adrien has experience of the level in our division and conference from last year, so we’re expecting him to adapt quickly into the environment,” stated McCann. “Our back line throughout the last few years has been a key, so we’re looking forward to him coming in and adding to that group.”

Reading United’s 24th season kicks off with a U.S. Open Cup First Round matchup against NPSL-side Philadelphia Lone Star on May 8 at 7 p.m., hosted by Alvernia University. The first USL League Two home match-up will be over two weeks later, as the Blue and Gold take the field against F.A. Euro on May 25 at Wilson High School. Season tickets are on sale at readingunitedac.com/tickets.