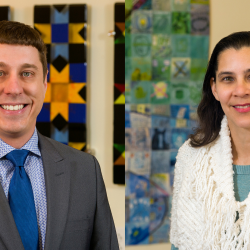 READING, PA  – Berks County Community Foundation has hired two local residents as new employees.
Brian Martin has been named to the newly-created position of Director of Accounting and Technology to assist the Senior Vice President for Finance and Operations in managing the financial and technology functions of the Community Foundation.

Brian worked in the insurance business for a number of years before moving on to a wholesale company. There, he served as Vice President of Accounting and Administration.

This marks the first time that a recipient of a Community Foundation scholarship has been hired by the Foundation.

Brian earned a Bachelor of Science degree in Finance with a minor in Legal Environment of Business from The Pennsylvania State University.

As the Community Foundation’s bilingual receptionist, Josie helps oversee the Conference Center and lobby, greets and directs all callers and visitors, and handles clerical duties.

Immediately prior to coming to the Community Foundation, Josie worked on QVC’s live TV programming, operating behind the scenes to drive sales and increase profit margins through fashion styling, merchandising, and carrying out the vision of fashion designers and producers.

A New York City native, Josie moved to West Reading in 2014. In New York, she worked for major TV studios, such as MTV, Paramount and Warner Bros., where she managed wardrobe and prop departments and executed the vision of art directors and television producers.

Munroe replaces Eunis Domenech as receptionist. As previously announced, Eunis was promoted to Finance and Operations Administrator to oversee the Foundation’s accounts payable and other finance-related functions.