ANNVILLE, Pa. – Junior outfielder Brooke Yerger was named the MAC Commonwealth Player of the Week as announced by the league office on April 29. 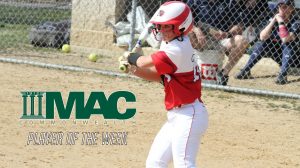 Yerger hit .476 (10-21) with a double, six RBI, five runs scored, two walks and five stolen bases as the Lions extended their winning streak to 12 games with a 6-0 week and clinched the No. 2 seed in the MAC Commonwealth Tournament. The Boyertown, Pa., native broke the single-season program record for hits with a 5-6 day in a sweep of Elizabethtown on Wednesday and added four RBI and three runs scored on the day.

This marks the second straight week that an Albright player has captured weekly honors after freshman Allison Melahn was named MAC Commonwealth Pitcher of the Week a week ago.

The Lions open the MAC Commonwealth Tournament on Friday, May 3 against No. 3 seed Alvernia at Messiah’s Starry Softball Complex. First pitch is set for noon.