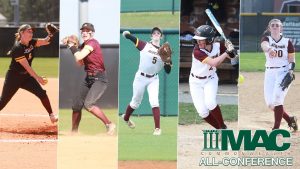 Junior Riley Shields, who has split time at pitcher and first base, was named to the First Team as a utility player. Shields has played in all 40 games for Alvernia. At the plate, she has a season batting average of .364 with 44 hits, including eight doubles and two home runs, and has driven in 30 runs. In the circle, Shields has a 3.34 ERA over 111 innings pitched and has struckout 79 batters on the season. Shields picked up an 11-7 win-loss record with 12 complete games and a save. She has a .978 fielding percentage with 91 putouts. This is the second-time Shields has earned All-MAC Commonwealth honors, she also earned First Team honors as a utility player last year.

Joining Shields on First Team as an infielder is shortstop JoAnnah Lim. Lim has appeared in 36 games for Alvernia, and is second in the MAC Commonwealth with a .466 batting average. She has 55 hits on the season with 11 doubles, a triple, 27 RBIs, and 27 runs scored. In the field, Lim has a .901 fielding percentage with 57 putouts and 61 assists.

Rounding out the First Team appearances for Alvernia as an outfielder is junior Analise Fouracre. Fouracre has played in 39 games for Alvernia. She has a .386 batting average on the season with 39 hits, six doubles, 14 RBIs, and 29 runs scored on 101 at-bats. In left field, Fouracre has a .942 fielding percentage with 48 putouts.

Making second team as an infielder is sophomore Sarah Reinert. Reinert has played at second base, third base, and shortstop throughout the season. She has started and played in all 40 games for Alvernia. Reinert has a .436 batting average and is leading the MAC Commonwealth with 58 hits. She also five doubles, a triple, 16 RBIs, and is second in the MAC Commonwealth with 39 runs scored. In the field, Reinert has a .941 fielding percentage, with 61 putouts and 67 assists.

Rounding out All-Conference honors is freshman pitcher Ally Decker. Decker finished the regular season with a 2.71 ERA over 98 innings pitched. She struckout 45 batters and picked up a 10-7 win-loss record. She also earned a save and pitched nine complete games.

Alvernia finished the regular season at 24-15-1, and was 10-6 in MAC Commonwealth play. The Golden Wolves are the #3 seed heading into the MAC Commonwealth tournament this weekend. They will face #2 seed Albright at noon on Friday at Messiah.