Dawson and two daughters graduate together 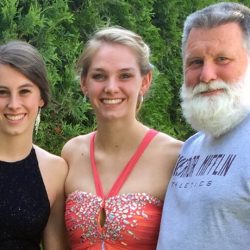 WYOMISSING, Pa.––Education is very important in the Dawson household. Not only does Mark Dawson work at Penn State Berks, but he will graduate with two of his six daughters, Dakota and Hunter, on Saturday, May 4, during the college’s 2 p.m. commencement ceremony.

Mark Dawson, who has held the position of Assistant Director of Business Services at Penn State Berks for the last eleven years, will earn a B.S. in Business while Dakota will graduate with a B.S. in Accounting. They will be joined by Hunter, who will earn a B.S. in Science, with the Biological Sciences and Health Professions Option from University Park, and will walk in the Berks commencement ceremony.

This is Mark’s third degree from the college; he earned an associate degree in Electrical Engineering from Penn State Berks in 1999 and an associate degree in Business Administration in 2013, when he graduated with daughter MacKenzy, who earned a B.S. in Business. He states that he wanted to earn his baccalaureate degree to advance in his career, choosing to focus on the management component of the degree.

He credits his wife and his six daughters–all of whom are Penn State alumni or students at the University–with motivating him to complete his degree. During his time at the college, Mark and Dakota even took some courses and studied together, and both made the college Dean’s List.

“The faculty provided great insights and they fostered a deeper appreciation for business. I was even asked to share some of my experiences with a class, so I had an opportunity to enrich students’ education at the same time as the faculty enriched mine.”

When Mark wasn’t busy working or studying at the college, he found time to coach to the college rugby team, leading them to the National Small College Championship in 2010.

Meanwhile, Dakota states that she has always been a big fan of Penn State, and all her older sisters are alumni. She adds that she thought about going to University Park but chose to stay at Berks for all four years.

On campus, Dakota was vice president of the Student Accounting Association. She was also a member of the Outdoors Club and the Ski and Snowboard Club. In addition, she was a member of the Women’s Basketball Team for a year-and-a-half.

Dakota completed an accounting internship at Penske Truck Leasing in their financial reporting department. Originally a semester-long internship, she was asked to stay for  three semesters. In fact, she is still working for Penske and they have offered her a position as a staff accountant upon graduation.

“The outstanding professors who helped guide me and all the different opportunities that Berks offers prepared me for the internship and full-time position with Penske,” she states.

Hunter took a different path from her father and sister and majored in Science with an option in Biological Sciences and Health Professions. She also had two minors: one in Biochemistry and Molecular Biology and one in Psychological Sciences.

She began her studies at Penn State Berks and then completed the second two years of her degree program at University Park. She states that while at Berks, she was a member of the Biochemistry Club and at University Park she is vice president of the Pre-Optometry Society. She has also made the Dean’s List several times.

Hunter has been accepted into the Pennsylvania College of Optometry, part of Salus University. Her ultimate goal is to become an optometrist.

“Penn State really helped guide me and offered a lot of support and advice,” she states. “I appreciate all the services that Penn State provided, which helped me to get accepted into optometry school.”

When asked how she feels about graduating with her father and sister, she comments, “I am thankful to be graduating with Dakota and my dad. I am very proud of both of them.”

Dakota echoes that sentiment, adding, “A lot of people don’t get this opportunity.”

“We have a good relationship, very open and honest,” states Dawson. “The eight of us [including his wife, Donna] are best friends. We have gotten even closer as the girls have gotten older.”

Hunter and Dakota are triplets with sister, English, a student at University Park, completing a double major in Environmental Resource Management and Community Environment Development.

In addition, Mark’s daughter Cassidy graduated from Penn State Berks in 2012 with a B.A. in Applied Psychology. She went on to complete dual master’s degree programs at Kutztown University: one in School Counseling and one in Clinical Mental Health with an emphasis on Neuropsychology. She is currently employed as a guidance counselor for Tulpehocken High School. Meanwhile, MacKenzy, who graduated with Mark in 2013, earning a B.S. in Business with a dual concentration in Accounting and Finance and a minor in Entrepreneurship and Innovation, went on to graduate from Widener Law School in May 2018. Finally, Zoey, a Chemical Engineering major, completed all four years at University Park campus, and graduated in 2018.

Mark resides with his wife, Donna, who holds a doctorate in education from Widener University and is employed as a reading specialist in the Wilson School District, in Shillington, PA.