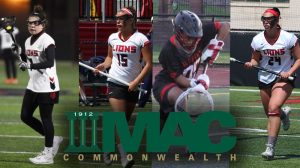 Baumann, too, made her mark on the Albright program single-season record book in the 2019 season as she garnered second team all-conference for the second-straight season. She ranked just behind Bass on offense with a career-high 88 points on 49 goals and a career-best 39 assists. Baumann eclipsed two career milestones this season as she tallied her 100th goal and 200th career point. She set single-season program records in ground balls and caused turnovers as well. Baumann ranked second in all of NCAA Division III with 66 caused turnovers, and fifth in caused turnovers per game with 3.71. She also led the MAC Commonwealth with 70 ground balls.

Mason earned all-conference second team honors for the second-straight season. She continued to stay as one of the top goalkeepers in the MAC Commonwealth as she ranked third in the conference with a 10.12 GAA and fourth with a .473 save percentage. Mason ranked fifth in the conference with 8.22 saves per game, and set an Albright single-season record for wins with 12. She also won a pair of MAC Commonwealth defensive player of the week honors during the 2019 season.

In her final season at Albright, Warren garnered All-conference honors for the first time in her collegiate career. She helped lead a Lions defense that has allowed the third-fewest goals in the conference, and led the conference with 225 caused turnovers. Warren also completely shattered her previous season high of 10 in caused turnovers as she has tallied 24 so far this season which ranked third on the team. She also tallied a career-high 32 ground balls.