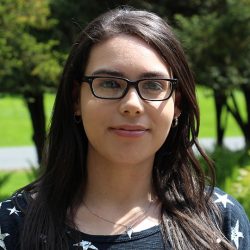 Eva Sanchez will be sorely missed at Penn State Berks following her graduation on Saturday, May 4. In four short years, she has made a lasting impact on the college and all who have known her.

All of Sanchez’s accomplishments are even more impressive when considered in light of the fact that early in her academic career, both she and her mother were diagnosed with cancer. In her freshman and sophomore years, she faced the challenge of balancing her school work with her own and her mother’s medical treatments. However she maintained a positive attitude and both she and her mother are doing well today.

Born in Reading, she moved with her family to Wyomissing when she was in fifth grade. After completing the ninth grade, she was enrolled in Commonwealth Connections Academy, an online school.

“I was terrified of a normal classroom environment,” she explains. “The most important thing to me [when I came to college] was that I felt welcome.”

Sanchez found that welcoming environment at Penn State Berks and made it her mission to make other incoming students feel welcome too. From serving as an intercultural mentor for international students, to acting as an orientation leader for first-year students, Sanchez helped others as they made the transition to the Penn State Berks community. She also served as a Lion Ambassador, diversity co-chair for the Student Government Association and director of operations for the college’s TEDx event.

The more she got involved on campus, the more her confidence grew and she became comfortable taking on leadership roles, such as serving as president of the Latinos United for Change (LUC), a student organization, in 2017 and again in 2018. Through LUC, she played an instrumental role in creating a scholarship program for Reading High School students coming to Penn State Berks and a fundraising campaign for residents of Puerto Rico who were in need of hurricane relief.

“Penn State Berks has contributed to my growth in a lot of ways,” states Sanchez. “I was very shy when I came here. I’ve gained confidence, become comfortable with public speaking, and taken on leadership roles. “I’m very grateful for all the opportunities that I’ve had at Penn State Berks,” she comments.”

With her strong interest in helping others, it is no surprise that Sanchez is an Applied Psychology major. During her time at the college, she excelled academically, making the Dean’s List every semester and being inducted into Psi Chi, the psychology honor society. She also received the Young Investigators Award for her research on musical preferences and emotional well-being in young adults.

As part of the Applied Psychology degree program, she completed four internships, including working for the Department of Law in Reading and the Children’s Alliance Center, conducting research with a professor on campus, and serving as the college’s social media intern.

“The internship component is really great,” she explains. “I have presented three times now. I feel like the ‘applied’ part of the Applied Psychology major is really what helped me because sometimes experience is what sets people apart.”

As a testament to all her accomplishments, Sanchez was honored with the prestigious Eric A. and Josephine S. Walker Award, presented to one student at each campus “whose outstanding qualities of character, scholarship, leadership and citizenship have been directed into programs and services that have positively influenced other students and have contributed to the prestige and well-being of the campus.” She received a University medallion, a certificate, and commendation from President Barron as part of the award.

What’s next for Sanchez? She has been accepted to Columbia University School of Social Work but she is still deciding on her future path. “As long as I’m able to have a positive impact on someone, I’ll be happy.”