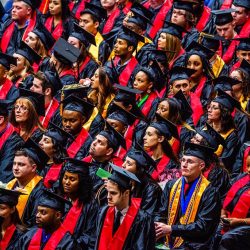 Reading, PA. – Reading Area Community College celebrated its 47th Commencement on Friday, May 10 at 2 pm at Santander Arena. Approximately 540 students graduated from their degree, certificate or diploma programs this year.

April Conrad was this year’s student speaker. April enrolled in RACC in the spring of 2017 in pursuit of her degree in health science. With an extensive background in naturopathy and holistic medicine, her career goal is to combine her passion for natural healing with scientific medical training to become a pediatric cardiovascular sonographer. During her two years at RACC, she showcased her leadership skills as a college ambassador and as a peer mentor. An avid writer, her poetry has been published in RACC’s literary magazine Legacy.

In her first commencement as RACC President, Dr. Susan D. Looney presented this year’s President’s Award to Alvernia University President Thomas F. Flynn, Ph.D. Dr. Flynn became president of Alvernia in 2005 and is retiring from his role this year. During this time, he has overseen the development of new strategic and campus master plans and the campus-wide process culminating in the achievement of university status. Under his leadership, Alvernia launched “Values and Vision:” The Fiftieth Anniversary Campaign. In addition to major capital projects already completed, endowed professorships and centers of excellence have been established, notably the O’Pake Institute for Ethics, Leadership and Public Service and the Holleran Center for Community Engagement.

“It is a privilege and a joy to see so many graduates take this step toward great success in the years ahead. Our students and graduates continue to inspire me every day, and will continue to make the RACC family of faculty, staff, students and alumni very proud,” Looney stated.