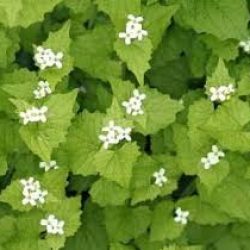 Don’t know what invasive garlic mustard is or how to identify it?

It’s arrival in the US: Garlic mustard was likely introduced into the United States by early European settlers for culinary or medicinal purposes. It was first recorded in Long Island, New York in 1868.

What exactly is it? Garlic mustard is a cool season biennial herb with triangular to heart-shaped leaves. Leaves give off an odor of garlic when crushed. First-year plants appear as a rosette of leaves that remain green through winter, maturing the following spring. Button-like clusters of white flowers give way to erect, slender pods by May. Dead stalks of dry, brown seedpods hold viable seed throughout the summer.

Controlling it: Because garlic mustard seeds can remain viable in the soil for five years or more, effective management is a long-term commitment. The goal of management is to prevent further seed production and to nip pioneering colonies in the bud. For small infestations, handpulling is extremely effective. Larger infestations may be controlled by cutting. This should be done when the plant is in flower. All plant material should be removed from the site following treatment, since seeds can still develop on cut stems.