KU’s Ryan Signs with Lehigh Valley Tempest of the WPSL

KUTZTOWN, Pa. – Graduating senior Alyssa Ryan of the Kutztown University women’s soccer team will continue her playing career on the pitch as she has signed to play with the Lehigh Valley Tempest of the Women’s Premier Soccer League (WPSL) for the upcoming 2019 summer season. 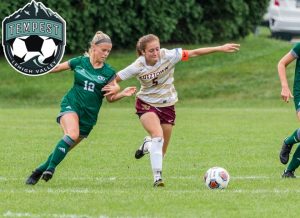 Ryan will have the opportunity to play with the best players in the area this summer, and once again play for KU and Tempest head coach Erik Burstein.

The North Wales native was a two-year team captain for the Golden Bears, who played in 82 career games, second most in program history. In her senior season, Ryan earned All-Atlantic Region and All-Pennsylvania State Athletic Conference Second Team honors. She scored three goals and added two assists for eight points this season, and finished her four-year career in Maroon and Gold with 14 goals and eight assists as a center midfielder.

Ryan also shined in the classroom, as she earned multiple PSAC Scholar-Athlete and Dean’s list honors, was named to the 2017 CoSIDA Academic All-District team, and was recognized as the 2019 KU Female Senior Scholar-Athlete of the Year at the All Sports Celebration in April.

The Tempest play at Cedar Crest College’s Falconplex in Allentown. They have four home games this season including the opener on May 30, followed by three dates in June (18, 26, 29).