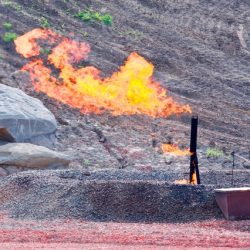 Methane is considered one of the most potent greenhouse gases, and roughly 520,000 metric tons of the gas is leaked by oil and gas facilities in the state each year.

The Methane Waste Prevention Act of 2019 was introduced in the U.S. House on Tuesday by Rep. Diana DeGette, D-Colo.

It would direct the Environmental Protection Agency to keep 2016 methane rules in place for new and updated oil and gas facilities.

“This could actually be a boom in business and in jobs because there’s more energy that needs to be utilized, technology that needs to be put in place, and the state has so much energy development that this would be great for Pennsylvania,” Reppenhagen points out.

The bill instructs the U.S. Interior Department to reinstate and update protections to reduce methane leaks, venting and flaring of natural gas from public lands.

The Pennsylvania Department of Environmental Protection recently proposed a rule to reduce emissions of volatile organic compounds, which would lead to the reduction of methane as well.

The federal bill sets a goal of capturing 85% of all gas produced on public lands within 3 years, and 90% within 5 years.

Reppenhagen says it also stops the Trump administration’s current effort to water down the Environmental Protection Agency’s rules on new and modified wells.

As a veteran who served in Iraq, Reppenhagen says he wants what’s best for all Americans, and he maintains that includes harnessing all natural resources available domestically.

“That conflict had a lot to do with fossil fuel and energy, and a lot of my service members sacrificed and died defending it,” he states. “It’s a shame to be wasting some of those energy resources here at home when we could be utilizing those because we have the technology and the resources to be able to do that.”

According to the Environmental Defense Fund, the amount of wasted methane in Pennsylvania causes the same near-term climate pollution as 11 coal-fired power plants.