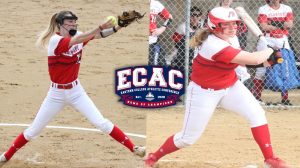 Sears hit .409 with three home runs and 38 RBI in 41 games for the Lions and led the team in batting average and RBI, while ranking second on the club with 54 hits. The 38 RBI fell just one shy of the single-season program record and Sears also added eight doubles and 24 runs scored. In the circle, the Howard Beach, N.Y., native went 7-9 with a 3.99 ERA and one save in 25 appearances (11 starts).

Melahn was named MAC Commonwealth Rookie of the Year after posting a 16-6 record with a 3.23 ERA in 27 appearances (23 starts) for the Lions including 14 complete games. The freshman hurler registered 11 wins in April as Albright embarked on a program-record 13-game winning streak and qualified for the MAC Commonwealth Tournament for the first time since 2007.