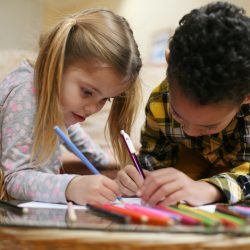 Children who attend high quality pre-k are better prepared for kindergarten and make smoother transitions to elementary school, according to a new report.

HARRISBURG, Pa. – More than 90% of Pennsylvania kindergarten teachers agree that high quality pre-k prepares children for school success, according to a new report.

The Pre-K for PA campaign and the Pennsylvania State Education Association surveyed kindergarten teachers about the value that access to publicly funded, high quality pre-k has in promoting school readiness.

Kari King is president and CEO of Pennsylvania Partnerships for Children, one of the founding organizations of Pre-K for PA. She says 96% of teachers surveyed agree that high quality pre-k is an important tool for helping children develop the physical, emotional and social skills that are needed to succeed in the classroom.

“And 98% said that they see investing in high quality pre-k makes sense for the return on investment that you’re seeing throughout the child’s life,” King states.

Since 2014 the state has invested $115 million to give 12,000 additional at-risk children access to pre-k, but more than half of eligible children are still left out.

With the state budget for the coming fiscal year due at the end of June, King is hoping legislators will agree to invest an additional $40 million in the state’s Pre-k Counts program, and $10 million in the Head Start Supplemental Assistance Program.

“With that we’ll be able to provide access to about 5,500 additional three and four-year-olds who are eligible and continue to chip away at about 56 percent of eligible preschoolers who currently don’t have access,” King states.

King points out that Pennsylvania still ranks 18th out of the 30 states that do invest in high quality pre-k.

King says it’s an investment that pays. Research shows that a child who attended a high quality pre-k program sees benefits that can last a lifetime.

“That child is less likely to need remediation, and even into adulthood where you see that they’re more likely to have successful outcomes in terms of not entering the criminal justice system and gaining employment,” she states

King notes that every dollar invested in high-quality pre-k returns $4 in savings and benefits to the Commonwealth from reduced crime, higher earnings and more.