KUTZTOWN, Pa. – After successful seasons both inside the classroom and on the field, 2019 Kutztown University softball graduates Tamara Jennings and Sara Keeny were selected as Google Cloud Academic All-Americans by the College Sports Information Directors Association of America (CoSIDA). 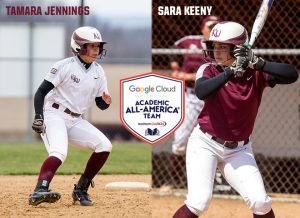 Keeny was named to the Second Team while Jennings was recognized on the Third Team. The duo were both named to the Academic All-District 2 Team back on May 17. They become the program’s first CoSIDA Academic All-Americans.

Keeny graduated with a Bachelor of Science in Criminal Justice. The Warminster, Pennsylvania completed her undergrad coursework with a 3.44 GPA (3.40 at time of nomination).

On the field, Keeny set program single-season records with 100 hits –which leads NCAA Division II– and a .518 batting average.

Keeny is a four-time All-PSAC East selection and a three-time NFCA All-Atlantic Region honoree. She was recently voted PSAC East Athlete of the Year, backing her batting average, hit and stolen base totals with 62 runs scored, 15 doubles, 29 RBIs, 23 walks, .684 slugging percentage and .955 fielding percentage in 56 games. Keeny is Kutztown’s career hits leader with 289 and holds a share of the program’s triples record with 14. She also ranks second in batting average (.440) and stolen bases (134), third in runs scored (172), fifth in total bases (348), seventh in walks (62) and eighth in at-bats (657).

Jennings received her Bachelor of Science in Computer Science at last Saturday’s commencement and finished her undergraduate work with a 3.89 GPA (3.87 at time of nomination). She’s enrolled in Kutztown’s five-year computer science/information technology combined B.S./M.S. program and is set to pursue her master’s degree.