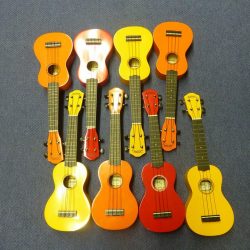 “We are so excited to help Exeter School District grow it’s wonderful ukulele program,” said Mike Andrews of Meadowood Music. “On June 17, our ukulele instructor, Donna Lang will work with six of Exeter’s music teachers to develop their ability to mentor students who now have uke experience.” The students have gained two years’ since 2017 Owatin Elementary School received ukuleles through the 2017 pilot of “Ukes in the Classroom” — a collaboration between the Reading Musical Foundation, Pretzel City Productions, and Meadowood Music.

With the ukes, Exeter received professional development training with Donna Lang for three of its music teachers. During that training, Owatin teacher Amanda Delbo exclaimed, “We are really excited to get this opportunity.” The excitement did not abate. In under two years, Exeter School District expanded its uke program to include at least three schools, and six music teachers who enthusiastically work with elementary and middle school students to learn to play these small, but exciting instruments. Those teachers, including Delbo (now married, last name Mrenna) will meet with Meadowood’s Donna Lang on June 17 to develop skills to assist their advancing students grow.

The uke program piloted at Owatin Elementary in 2017 started with just forty Makala MK-S ukuleles (by Kala), and three teachers dedicated to beginning an in-school ukulele program. Armed with resources and ideas gained from training with Donna Lang, the Exeter teachers created something that generated so much excitement that, within a year, the school district purchased ukuleles for Lorane Elementary and Reiffton Middle Schools. In fact, students’ excitement about ukuleles led Exeter School District music boosters to purchase ukuleles to sell to students’ parents as a fundraiser during fall/winter of 2018. The boosters correctly guessed that parents would buy ukes for children who had, for months, talked of nothing but ukuleles. This spring, Melissa Crotty, Chair of the Exeter School District Music Department, contacted Meadowood Music to inquire if Donna Lang could offer more advanced training to the six music teachers who now teach ukulele in Exeter School District’s Elementary and Middle Schools. She can, and will, do just that on June 17.

The project fosters in-school ukulele programs by cost-sharing the purchase of Makala MK-S ukuleles, and providing free professional development training with Meadowood’s Donna Lang. Exeter School District and Reading School District received the 2017 and 2018 awards. The award in 2019 to Fleetwood School District is the largest so far – cost sharing ninety ukes, plus free professional development training. “By introducing ukuleles in the elementary school, Fleetwood will be preparing students to succeed in the guitar program already in place in the middle school,” said Mike Andrews of Meadowood Music. “It’s important because students in schools with guitar programs perform better academically, have fewer disciplinary issues, and stay in school until graduation. Uke… what a marvelous, simple thing to help kids succeed!” Two Fleetwood music teachers, Scott Troxell and Nadine Hoffman, will meet with Meadowood’s Donna Lang on June 14 to develop skills to create and grow Berks County’s latest in-school ukulele program.

In 2018, Reading School District was awarded seventy ukuleles for Northwest Middle School, and professional development training for three teachers. Northwest students will perform with their ukes at the Berks Country Fest Concert on June 29 at RACC’s Miller Center.

Meadowood Music is more than a means for its owners to sell and service stringed musical instruments. The retail part of the business is just one of its facets. Since founding the company in 2000, Mike Andrews and Paula Taylor have fostered professional and recreational music-making in Berks County by helping beginning through master level musicians develop musical skills through expert instruction, and by creating, producing, sponsoring, and supporting opportunities for professional and amateur musicians to play music. Such opportunities include free community open mics and jam sessions, concerts by local, regional and national artists, music festivals, free workshops and clinics, and collaborations with other Berks County organizations.

Meadowood’s collaborators in “Ukes in the Classroom” are the Reading Musical Foundation and Pretzel City Productions.