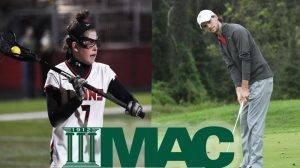 “These recipients represent the true meaning of a student-athlete,” said MAC Executive Director Ken Andrews. “This is one of the top conference awards we give out each season. It honors our student-athletes who excel both in the classroom and on the playing field.”

Bass was one of 10 Lion winter/spring sport athletes to earn a 4.0 for the spring semester as she graduated with a degree in Mathematics in May. She concluded her Albright career by becoming the second player in program history to earn IWLCA All-Region honors in addition to earning All-ECAC honors, and All-MAC Commonwealth first team honors for the second-straight season. The new all-time leading scorer in women’s lacrosse program history also became the first Lion to be selected to the IWLCA Division III All-Star Game. She capped her final season with a single-season program record 91 points behind 50 goals and 41 assists.

Hand completed his spring semester in the classroom with a 3.75 GPA.  He earned All-MAC honors for the first time in his collegiate career at MAC Championships back in April when he finished tied for sixth overall to be named to the All-MAC Second Team. Hand posted a team-low scoring average of 78.1 strokes while playing in nine events during the season. He shot a season-best 67 at the Albright Quad-Match back in April to earn the individual title.