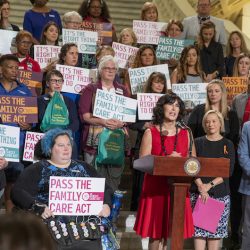 Family caregivers in the Keystone State provide 1.4 billion hours of unpaid assistance every year, valued at over $19 billion dollars. Proposed legislation, known as the Family Care Act, would help working Pennsylvanians take time off from work to care for themselves, close family members or a new child without sacrificing their jobs or livelihood.

“People will end up aging at home as opposed to going into expensive nursing homes, and possibly even going on to Medicaid, which takes financial assistance, both from the state and the federal government,” says Grossi.

The bipartisan Family Care Act has been proposed in both houses of the General Assembly. Advocates expect the bills to be introduced in the coming days.

Grossi adds that people who are forced to leave their jobs to care for a parent or loved one not only sacrifice income, they may also jeopardize their own future financial well-being.

“They’re going to have less Social Security benefits or retirement benefits, so this is also a way to make sure that our future Commonwealth retirees have the financial security that they need,” says Grossi.

Workers who take paid leave under the Family Care Act also would not have to apply for unemployment or state entitlement programs, and could keep their jobs while on leave.

The leave would be financed by a small payroll deduction. Grossi notes that this type of paid family leave has a proven track record of success.

“Six other states and the District of Columbia have passed this legislation,” says Grossi. “So, we’re certainly hoping that Pennsylvania would become the seventh state.”

The neighboring states of New York and New Jersey are among those that have passed paid family-leave legislation.