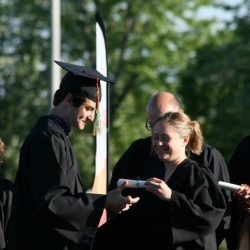 The on-time high school graduation rate in Pennsylvania is 87%, a 24% improvement since 2011.

The data in the 2019 report ranks the Keystone State 17th in the nation overall, with improvements in children’s economic well-being, education and health, while holding steady in the fourth category, family and community.

Kari King, president and CEO of Pennsylvania Partnerships for Children, notes that despite the improvement, the Commonwealth’s ranking among the states remains about the same.

“What it really shows is that other states are making more meaningful investments in programs that benefit children and are therefore able to move up the ranking much more quickly than Pennsylvania,” she states.

King adds that since the first Data Book was released in 1990, the share of Pennsylvania children living in high poverty areas has worsened by 71%, indicating much more needs to be done.

But she says all children in this country deserve brighter futures.

“Children represent 25% of the population but they are 100% of our future,” she states. “And when we invest in all children, our communities are stronger and the country is stronger.”

Boissiere says federal support of early childhood programs is critical for their success.

Every year, 55 federal programs such as Head Start and the Children’s Health Insurance Program distribute more than $880 billion to states based on census data.

According to King, the 2010 census missed more than two-million children nationally.

“So we’re trying to bolster public awareness of the need for a complete count in the upcoming 2020 census, ensuring that we have as much support as possible from the federal government for these needed programs,” she states.

King says in Pennsylvania, 15% of children under age five are at risk of being missed in next year’s census because they live in hard-to-count neighborhoods.