Hurricane Maria was a natural disaster that wreaked havoc on Puerto Rico and its people. This is a two part report on the damage, the hope, and the stories of its survivors.

“The largest blackout in U.S. history.”

“The worst storm to hit the island in 80 years.”

These statements were made by multiple major news outlets, serving as eye-catching headings and startling facts to entice readers around the country. Tropes sprung from media saying the storm seemed like something straight out of a movie scene. But for the American citizens of Puerto Rico, September 20th of 2017 will be known as the day that changed their lives forever. Now, almost two years later, Puerto Ricans are bracing themselves for the beginning of hurricane season, as they have yet to recover and rebuild from the devastation of Hurricane Maria.

Hurricane Maria hit the island of Puerto Rico as a category four hurricane. The “sister storm” made its appearance shortly after Hurricane Irma: a category five storm that left thousands of Puerto Ricans without power. According to a report by the National Oceanic and Atmospheric Administration (NOAA), the winds completely destroyed the sensors used to measure the speed of the storm’s gusts. NOAA reported that the last measurement on the wind sensors came in at 133 miles per hour. The intensity of those winds were able to uproot trees, cell towers, houses, and livelyhoods throughout the entire island.

Relentless rainfall immediately followed suit, and was so intense that it caused island-wide flooding. NOAA calculated that within two days, “15-20 inches of rain had fallen in most areas of the island” and “thirty rivers in Puerto Rico reached major flood stage.” Multiple families throughout Puerto Rico were forced to their rooftops, waiting for their way out to arrive without knowing when or if that rescue was ever going to come.

Flooded, wrecked and left in the dark the victims of Hurricane Maria needed help. Logically, the first place they expected help to come from was their own country. Unfortunately, the help they received from the United States made Puerto Ricans feel more like foreigners than U.S. citizens.

Days, weeks and months passed without electricity being restored to the island. No electricity meant no light, no running water and for the most part no means of communication. At the time, Gregoria Santiago-Torres, who moved to Berks County years prior in order to be closer to her grandchildren, tried contacting her only remaining siblings, multiple cousins, children and family friends in Puerto Rico. When asked if she remembered anything about Hurricane Maria, “I watched the news, for days. No one knew what was happening. I didn’t–I didn’t know if my family was alive,” Stantiago-Torres said.

Many Puerto Ricans were forced to evacuate to other states, such as Pennsylvania, New York and Florida. Many found shelter in various hotel rooms provided by the Federal Emergency Management Agency (FEMA). This assistance lasted about 10 months, after which FEMA was unable to offer up any resolutions for the now homeless Puerto Ricans.

CNN reported that the number of newly homeless islanders totaled nearly 1,800. FEMA’s efforts were immediately criticized when compared to their response to Hurricanes Harvey and Irma. A study by the British Medical Journal composed the startling facts of those efforts into a bar graph pictured below. 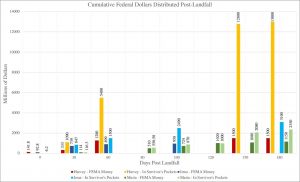 FEMA was not the only group criticized in light of these events; a majority of Puerto Ricans blamed the Trump Administration for not being committed to helping the hurricane victims. Many Puerto Ricans believed not only that the president failed to accurately assess the damage done to the island, but that he was misusing the emergency funds they needed. In a story published by USA Today in September, 2018, nearly $10 million was taken from the disaster aid agency and went to fund Immigration and Customs Enforcement (ICE) instead.

In the spring of 2019, a disaster aid relief bill was proposed in order to provide further assistance to citizens in places like Puerto Rico, who need help recovering from natural disasters. President Trump and other Republicans had their stipulations and stated they would not approve the bill unless some money would go towards border security.

The administration debated and voted multiple times. Each time, the vote was halted by a Republican member of Congress. Still, democrats were firm in their positions to get the bill approved, and last month they were successful. The bill was approved by Congress for $19 billion without any amount going towards immigration control. Earlier this month, the bill landed on President Trump’s desk and despite his stipulations towards border security, it was signed.

The money will also aid other “states damaged by hurricanes, flooding, wildfires and earthquakes…including California, Florida, Georgia and Iowa,” according to CNBC. Although the full amount of the disaster aid package will not go towards Puerto Rico alone, it is a huge step in the right direction.

[Translation: “It’s not going to fix everything. Look, I don’t even know if it will be enough. But, I will tell you this, it gives us hope. And in this moment, hope is the thing that we need the most.”]