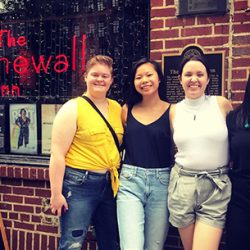 Six members of the Penn State Berks Rainbow Alliance, a student organization, traveled to New York City on June 7 to participate in PRIDE events as part of Stonewall 50 – WorldPride NYC 2019. WorldPride is the largest Pride celebration in the world spanning the entire month of June 2019. Stonewall 50 refers to the 50th anniversary of the Stonewall Uprising of June 28, 1969, which occurred in New York City’s Greenwich Village neighborhood and is widely considered to mark the start of the fight for LGBTQA+ rights in the United States.

Students visited the Leslie Lohman Art Museum, the most prominent and oldest arts organization involved in the preservation and exhibition of LGBTQ+ artworks. They also visited Stonewall Inn, a national historical landmark and site of the riots that sparked the LGBTQ rights movement in 1969. They stopped for ice cream at the Big Gay Ice Cream Shop.

In the evening, they went to see The Prom on Broadway. The Prom, which was nominated for seven Tony awards, is the story of a teenager in rural Indiana who was excluded from her prom for wanting to attend it with her girlfriends, and the faded egocentric Broadway actors who try to get publicity by taking on her cause. The play addresses important topics, such as coming out, bullying, homophobia and notions of ‘family.’

Hannah Fassbender, president of Rainbow Alliance and senior Global Studies major, commented, “It was an amazing experience for the members of Rainbow Alliance to see how others in the LGBTQ+ community are living their lives out and proud. It was really inspirational to go to the art museum and see all the wonderful kinds of art that people from our community have made. The Broadway show moved many of us to tears because we were able to see a form of ourselves on stage and in the spotlight. It was a trip that I believe all of us will never forget!”

The trip was organized by the student members of Rainbow Alliance. Dr. Cheryl L. Nicholas, faculty adviser, accompanied the students.