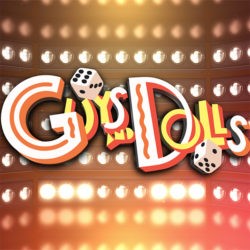 Tony-Award winning musical Guys and Dolls brings the high-stakes energy of New York City and the exoticism of Havana to Reading this summer at the Genesius Theatre. This teen production tells the tale of two very different couples and their decisions to give into life’s ultimate gamble and bet on love. The musical stars Andrew Bausher as Nathan Detroit, a gambler plagued with gamophobia; Chloe Marturano as Ms. Adelaide, a ditzy yet loveable performer; Ben Daniels as Sky Masterson, a slick and sweet-talking bachelor; and Paulina Cevallos as Sarah Brown, a do-gooder missionary.

No strangers to the stage, these four actors have performed in multiple shows all over Berks County. Collectively the numbers range from 15-31 different productions, and it is evident from the first note to the final one. From the beginning of the production, it is obvious that the chemistry between Sarah & Sky is electric. One verse into “I’ll Know” and well, you’ll know just exactly how strong that connection comes across on stage. You won’t want to miss Marturano playing up her animated character, while audience members experience reincarnation as Ms. Adelaide embodies Fran Drescher’s nanny persona. The duet between Sarah and Ms. Adelaide remains to be one of the highlights of the show.

Truthfully, I wish I could list the standouts moments of every actor who participated in this production because there were so many. Here are a few standouts: Roberto Guevarra shines as Nicely Nicely Johnson. He plays a sidekick to charismatic Nathan, who often provides comedic relief, but also exhibits extremely rich tone throughout his performance. Harrison Brumbaugh’s puts on an enthralling performance as the resident tough guy Big Jule. Making his Genesius Theatre debut, Jahlil Little as Harry the Horse also shocks by demonstrating a seasoned performance that would fool you into believing otherwise.

Emily Snyder outdoes herself with the visual versatility of the production’s choreography. Every single part of the stage is used, good news for those who end up in overflow seating. The Cuban salsa in “Havana” is fluid and romantic; while numbers like “Luck Be a Lady” are powerful, intricate, and demand your attention. Although this is her directorial debut, it is very apparent that Becka Malanios has theater experience. Wrangling teenagers is not an easy task, and Malanios has masterfully managed to not only do that, but to lead and instruct these teens into performing one of the most captivating productions that I have seen in Reading to date.

Despite disorganization from the musical’s producer, the cast and crew (including the beautifully talented live musicians who provide the production’s music) managed to not only put on a wonderfully entertaining show, but also to immediately silence anyone who even dared to suggest that the teen production could not compare to any previous adult ones.

When asked if she had anything she wanted naysayers to remember, Cevallos said, “Just because we’re teenagers doesn’t mean that we can’t bring down the house, we have an amazing cast…Personally, I’ve done many adult productions and I know they have too. We’ve grown from the productions we’ve done and we see [adult actors] as role models in a way. And I think we mimic them and we use them as a base to what we do here. This could be just as good as any adult production, and even better.”

Guys and Dolls will be running until June 30th. Buy tickets online at genesiusdifference.org today, and in the words of Bausher, “Come see Guys and Dolls!”