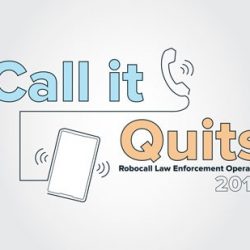 U.S., state, and local enforcement stops companies responsible for over one billion calls

The Federal Trade Commission and its law enforcement partners yesterday announced a major crackdown on illegal robocalls, including 94 actions targeting operations around the country that are responsible for more than one billion calls pitching a variety of products and services including credit card interest rate reduction services, money-making opportunities, and medical alert systems.

The joint crackdown, “Operation Call it Quits,” is part of the Commission’s ongoing effort to help stem the tide of universally loathed pre-recorded telemarketing calls. It also includes new information to help educate consumers about illegal robocalls. In addition, the FTC continues to promote the development of technology-based solutions to block robocalls and combat caller ID spoofing.

“Operation Call it Quits” includes four new cases and three new settlements from the FTC alone. The U.S. Department of Justice (DOJ) filed two of the new cases on the FTC’s behalf. Collectively, the defendants in these cases were responsible for making more than a billion illegal robocalls to consumers nationwide. Today’s announcement brings the number of cases the FTC has brought against illegal robocallers and Do Not Call (DNC) violators to 145.

“We’re all fed up with the tens of billions of illegal robocalls we get every year,” said Andrew Smith, Director of the FTC’s Bureau of Consumer Protection. “Today’s joint effort shows that combating this scourge remains a top priority for law enforcement agencies around the nation.”

In addition to the actions by the FTC, 25 federal, state, and local agencies have brought 87 enforcement actions as part of the initiative. State partners announcing enforcement actions this week include the Attorneys General Offices for Alabama, Arizona, Colorado, Florida, Illinois, Indiana, Michigan, Missouri, North Carolina, North Dakota, Ohio, Oregon, Pennsylvania, Texas, and Virginia; the Consumer Protection Divisions of the District Attorneys for the Counties of Los Angeles, San Diego, Riverside, and Santa Clara, California; the Florida Department of Agriculture and Consumer Services; and the Los Angeles City Attorney. In addition, the United States Attorneys’ Offices for the Northern District of Georgia, Middle District of Florida, and Southern District of Texas, with support from the Treasury Inspector General for Tax Administration, have contributed five criminal actions.

“Every year, our office gets more consumer complaints about unwanted robocalls than just about any other issue,” said Indiana Attorney General Curtis Hill. “At best, these calls represent a nuisance for families just wanting to enjoy peace and privacy without needless disturbances interrupting their routines. At worst, they represent scams that successfully steal people’s identities or hard-earned money. In Indiana, we are quite serious about stopping illegal robocalls, and our alliances with such partners as the FTC will prove a valuable asset in this mission.”

Each FTC case is described HERE

NOTE: The Commission files a complaint when it has “reason to believe” that the named defendants are violating or are about to violate the law and it appears to the Commission that a proceeding is in the public interest. The case will be decided by the court. Stipulated final orders have the force of law when approved and signed by the district court judge.

The Commission refers a complaint for civil penalties to the DOJ for filing when it has “reason to believe” that the named defendants are violating or are about to violate the law and that a proceeding is in the public interest. Consent judgments have the force of law when approved and signed by the district court judge.