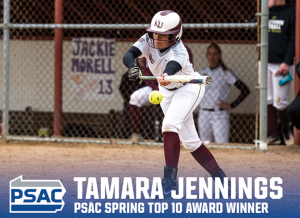 The Philadelphian compiled a .416 batting average with 72 hits, 50 runs scored, 13 doubles, three triples, seven home runs, 51 runs batted and 14 stolen bases in across 56 games, setting career-highs in every category. Jennings also had a .458 on base percentage, .647 slugging percentage and .981 fielding percentage.

Jennings led the PSAC with eight sacrifice flies, while ranking third in RBIs, fourth in runs scored and fourth in hits. She was also amongst the conference leaders in batting average (ninth), slugging percentage (ninth), stolen bases (ninth) and at-bats (10th, 173).

Jennings, a member of the Student-Athlete Advisory Committee (SAAC), will begin work towards her Master of Science at Kutztown this fall. She is enrolled in the five-year computer science/information technology combined M.S./B.S. program.

Tuesday’s announcement gives Kutztown a female Top 10 recipient for the second year in a row. Jennings is KU’s eighth female Spring Top 10 winner and 21st female Top 10 honoree since the awards were initiated during the 1997-98 academic year.

The Top 10 Awards, selected by the PSAC’s sports information directors, recognize student-athletes who distinguish themselves in the classroom, as well as in the arena of competition. The conference designates Top 10 Award winners after each of the sports seasons: fall, winter and spring.

To be a candidate for the Top 10 Awards, a student-athlete must have achieved a minimum of a 3.50 cumulative grade point average and must be a starter or key reserve with legitimate athletic credentials.