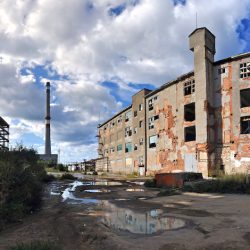 HARRISBURG, Pa. – A new report documents the shift of manufacturing jobs away from Northeastern states as the manufacturing sector has shrunk overall.

The report from the Georgetown University Center on Education and the Workforce said in the 1940s, almost a quarter of all jobs were in manufacturing, and those jobs were concentrated in just 15 states – including Pennsylvania.

But since 1947, more than 3 million manufacturing jobs have been lost, even as economic output grew by $4 trillion.

According to Keystone Research Center Executive Director Stephen Herzenburg, 70 years ago, 40% of jobs in Pennsylvania were in manufacturing, but by 2016 that had declined to 8%.

“We haven’t really had state or national policies to stem that decline effectively, or to make sure that there are enough middle-class jobs in the rest of the economy,” Herzenburg said.

The report showed the service sector, accounting for only 21% of jobs in 1940, has grown to more than half of all jobs nationwide.

Neil Ridley, state initiative director at the center and one of the report authors, pointed out that manufacturing in Pennsylvania was once dominated by steel. But since 2000, the state has lost about 290,000 manufacturing jobs.

“Now, when you look at the manufacturing landscape, the chemical industry and food and beverage production are much more important than steel production in the state,” Ridley said.

He said the steep decline in manufacturing jobs is due to several factors, including automation, international competition and rising worker productivity.

Sue Mukherjee, chief strategy officer at Shippensburg University, noted there are steps Pennsylvania’s higher education system can take to help the workforce make the transition to jobs in a shifting economy.

“Working in partnership with the workforce-development agencies to see how we could retool some of these workers skills to respond to where the jobs are,” Mukherjee suggested.

She added rapid job growth in fields such as medical, financial and educational services will require universities to offer courses and bundled degrees that fit the new job market.