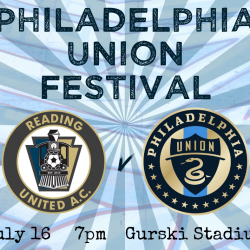 Local fans can look forward to watching the Eastern Conference leading Philadelphia Union, led by Reading United alum Ray Gaddis and United States Mens National Team star Alejandro Bedoya, as they clash with their USL League Two affiliate, Reading United. Union players and staff will be available for autographs throughout the event. Fans of all ages will again be able to show off their skills at the U on Tour, a series of soccer themed games.

“We are looking forward to playing our annual friendly against Reading United,” said Ernst Tanner, Union Sporting Director. “This match is a terrific opportunity to continue to help grow the sport of soccer in our region. Several players in our organization have come through Reading United and this is also a special way to commemorate our relationship.”

United have been an important piece of the Philadelphia Union’s unique player development structure since 2010. The partnership has allowed Reading to become one of the USL League Two benchmark organizations. Reading has claimed three division titles and produced over 100 professional soccer players since becoming the Union’s official development affiliate. The 2018 campaign was a high water mark for United as they finished the regular season unbeaten record, advanced to and hosted the USL League Two Championship Game and were named the 2018 USL League Two Organization of the Year.

“We are proud of our 10 year partnership with the Philadelphia Union,” said Reading United vice president, Art Auchenbach.  “The Union have been tremendous partners in utilizing the “Path to Pro” from the YSC Academy, Union Youth Teams and Bethlehem Steel.  Reading’s niche position in the Union development model affords us the opportunity to continue our well established USL League Two success.  We look forward to continued grass roots development of soccer in eastern PA, with the Union/United partnership being the pinnacle for youth and college players looking to take the next step to USL Championship and Major League Soccer.”

Over the ten years that Reading and the Philadelphia Union have partnered a total of eleven Reading United products have gone on to play professionally for the Union. Gaddis, who played for Reading in 2010 and 2011, has played in 189 games for the Union since being selected with the 35th pick in the 2012 MLS SuperDraft. Fellow United alum Zach Zandi became the first player to compete at each level of the Union’s developmental path (Union Academy, Reading United, Bethlehem Steel, Philadelphia Union First Team) when he subbed on in the Union’s U.S. Open Cup Fourth Round match against D.C. United. Former Reading United Head Coach Brendan Burke is the current head coach of Bethlehem Steel FC, the Union’s USL Championship affiliate.

Tickets for the Philadelphia Union Festival, and all remaining regular season Reading United matches are available at www.readingunitedac.com. Contact our ticket sales team at [email protected] for all your group needs.