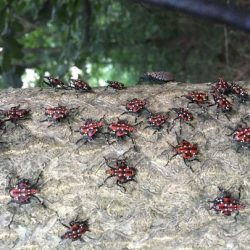 (Image: Penn State Extension) The first three stages of immature spotted lanternflies are black with white spots. Fourth-instar nymphs, shown here, begin to appear in July and and will molt to become adults.

Leesport, PA – Penn State Extension researchers are reporting that hatching of spotted lanternfly eggs in Pennsylvania is mostly complete for this season, and the nymphal stages of the insect are evident over much of Berks County, as well as in counties across southeast Pennsylvania, northern Delaware and west-central New Jersey.

The earliest instar of spotted lanternfly (SLF), which began appearing in late April, is quite tiny (about the size of a tick) and is black with small white spots. Two more stages follow, identical except for slightly larger size. The fourth instar, much more noticeable, is red with black and white spots and is about 1/2 inch long, and is just now making an appearance. All of these four nymphs are great hoppers but cannot fly. They feed on tender plant tissues, gradually moving to woody plants and trees as their greater size allows them to feed through bark. By mid-to-late July the fourth instars will transform into the adult, which has wings and can feed on mature trees.

The Spotted Lanternfly is an invasive insect that affects gardens and landscape plants as well as important Pennsylvania commodities. The quarantine for Spotted Lanternfly has expanded to include 14 counties in southeastern Pennsylvania as well as a few counties in neighboring states. It has continued to proliferate in some areas within this quarantined area. The strategy from the first has been to contain the invasion while Penn State scientists and other researchers around the world work to unravel the biology of this insect.   The goal is to find safe and effective controls both for commercial growers and for homeowners.

Recently, researchers have discovered two fungal pathogens that attack and kill spotted lanternfly. While scientists are excited about this find, more research is needed (and ongoing) to further evaluate if this can be utilized to reduce populations of spotted lanternfly.

A concern from the beginning of this invasion has been that there will be an overreaction of widespread chemical use, which itself could be a risk. Beth Finlay, Area Master Gardener Coordinator for Penn State Extension, explains that SLF is not difficult to kill chemically, but that the same insecticides that many homeowners might employ are lethal to butterflies, bees, and other pollinators, and can find their way up the food chain to birds and other wildlife.

For most residents, Penn State Master Gardeners are recommending simple mechanical management in lieu of chemical management.   Stomping, swatting, or hosing with a sharp water blast can kill or disable thousands of SLF without introducing toxic products.

There are situations which might justify use of pesticides. If so, Penn State researchers urge residents to use only registered pesticide products and to follow the label instructions carefully. Residents may also consider hiring a licensed applicator, who will have access to Penn State Extension’s current professional guidelines.

In addition, banding trees with sticky flypaper will capture hundreds of nymphs and adults, since the feeding habit of all stages is to feed, drop to the ground, and climb up tree trunks to feed again.   One simple 3-5” band placed about chest level is sufficient. But Penn State warns that there is a risk of capturing songbirds, bats, butterflies and other desirable creatures on the sticky tapes, and cautions that every band should have a cage of chicken wire or hardware cloth placed around the tree, outside the band, to keep wildlife off the tape.

For detailed factsheets on SLF and for customized advice on how to deal with infestations, homeowners may call Penn State Master Gardener Garden Hotline at 610-378-1327 1327 or go online at https://extension.psu.edu/spotted-lanternfly