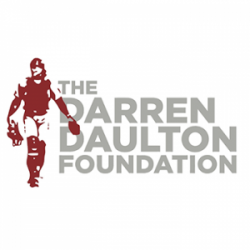 Fightins will honor cancer survivors and those battling the disease

The Reading Fightin Phils have announced that former Philadelphia Phillies player and current broadcaster John Kruk will be in attendance and sign autographs on Thursday, July 11th as part of R-Phils Cancer Awareness Night at FirstEnergy Stadium. 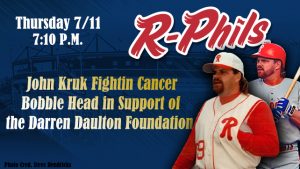 Kruk’s appearance is in support of the Darren Daulton Foundation, whose mission is to provide financial support to families that are experiencing financial challenges due to treatment of a malignant primary brain tumor diagnosis.  Kruk, Daulton’s former Phillies teammate, will be on hand to greet fans and sign free autographs.

The first 2,000 adults in attendance will receive a John Kruk Fightin’ Cancer Bobblehead in support of the Darren Daulton Foundation, thanks to Roland Rick Stock, Attorneys at Law.

“The law firm of Roland Rick Stock is proud to once again sponsor Cancer Awareness Night, and the John Kruk Fightin’ Cancer Bobblehead in support of the Darren Daulton Foundation,” said Charles Rick, a partner at Roland Rick Stock, Attorneys at Law. “This is our second year sponsoring this type of event and this cause holds special meaning for the entire firm. We are, unfortunately, all touched by cancer in some way and for many of us it is very personal. One of our own attorneys is a four-time cancer survivor.”

“I was diagnosed with Hodgkins Lymphoma when I was 27 years old,” said Sandra Liberatori, Esquire of Roland Rick Stock. “Obviously, any type of cancer is a devastating diagnosis, but I was treated and cured. Had I been diagnosed a decade or so before, I might not have been so fortunate. Thirty-plus years later, I have been diagnosed with three other types of cancer and survived them all, thanks to the research that has been done and treatments that have been developed in my lifetime.”

Fellow Phillies alumni Mickey Morandini and Tommy Greene will also be on hand in support of the Darren Daulton Foundation, and will take part in the free autograph session.

The Fightins will be holding an auction where fans can bid on prizes such as a foursome in the Darren Daulton Foundation golf outing, an opportunity to guest bartend with a former Phillie at Chickie’s & Pete’s on Sunday, October 13th, and autographed baseballs signed by Kruk, Morandini, Greene, and more.

Gates will open at 5 p.m. ahead of the Fightin Phils 7:10 p.m. game time against the Trenton Thunder. Kruk, Morandini, and Greene will each throw out a ceremonial first pitch at approximately 6:45 p.m. The free autograph session will begin at approximately 7:10 p.m.

The Darren Daulton Foundation: Daulton, nicknamed “Dutch,” played Major League Baseball for the Philadelphia Phillies for 14 years. In 1997,Daulton was traded to the Florida Marlins where he earned a World Series ring to end his career in baseball. Daulton completed his career as a three-time National League All-Star and earned the distinction of winningthe 1992 Silver Slugger Award. Daulton was also named the National League RBI leader that year. In 2010, the Phillies inducted Daulton into the Philadelphia Baseball Wall of Fame. Love, life, fight are three words that best describe Daulton to his fans. Daulton was a man that was easy to love, to respect and to admire. He had a genuine passion for people. In 2013, Daulton was diagnosed with Glioblastoma (GBM), the most aggressive form of brain cancer. Rather than giving into the disease, Daulton sought to help others by forming The Darren Daulton Foundatio. The Foundation helps patients pay medical and personal expenses for families facing hardship due to the extraordinary costs of treatment. Daulton fought a tremendous battle with brain cancer but eventually the disease took his life on August 6, 2017. He epitomized all that was good in the world. As the late long-time Phillies announcer Harry Kalas stated many times, “[Dalton] was the best team leader in any clubhouse and one of the nicest men I ever met.” Daulton’s talent on the baseball field and his kind disposition won him the respect and admiration of all who knew him. For more information about hos you can held further Darren’s mission, please visit www.darrendaultonfoundation.org.