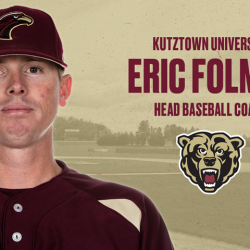 KUTZTOWN, Pa. — With nearly two decades of coaching experience at the NCAA Division I level, Eric Folmar has paid his dues. Now, he’s getting the opportunity to lead a program for the first time.

“I’m excited to have Eric joining the Golden Bears,” Bamberger said. “He brings a wealth of high-level playing and coaching experience to our baseball program and athletic department. I am grateful to our search committee for their hard work and diligence throughout this process. Eric’s background and reputation stood out among a substantial pool of candidates and will benefit Kutztown University tremendously going forward.”

Folmar, a native of Chambersburg, Pa., most recently spent three seasons as associate head coach at the University of Louisiana Monroe from 2015-17. He was responsible for working with the Warhawks’ hitters and infielders on the field and took a lead role in many aspects of the program.

“I’m excited to join Kutztown University and a baseball program with a rich tradition of success,” said Folmar. “I want to thank Greg Bamberger, Michelle Gober and the entire search committee for entrusting me with this opportunity. The foundation is here to compete at the conference, regional and national levels and I’m eager to get on the field and get to work with our Golden Bear student-athletes.”

In 2015, ULM won 25 games and produced a .271 team batting average to rank fifth in the Sun Belt Conference. Under Folmar’s watch, senior third baseman Keelin Rasch posted the league’s second-highest batting average (.359) and was amongst its leaders in hits (78), slugging percentage (.571), on-base+slugging (.966), runs batted in (41) and total bases (124). The Warhawks’ fielding percentage exceeded .960 in each of Folmar’s three seasons and he coached seven players selected in Major League Baseball’s First-Year Player Draft.

Folmar was an assistant coach at Army during the 2014 season, helping the Black Knights to a 33-18 overall record and 15-5 mark in Patriot League play.

Prior to arriving at West Point, Folmar completed eight seasons as an assistant coach at Penn State. Folmar was part of 200 victories with the Nittany Lions and directed the program’s recruiting efforts. He handled third base coaching duties as well as coaching infielders and base running.

Folmar recruited pitcher Drew O’Neil who held the program’s season and career saves records until 2016 and was drafted by the Chicago White Sox in the fourth round of the 2008 MLB First-Year Player Draft. He also brought catcher Ben Heath to Penn State. Heath belted a PSU single-season record 19 home runs in 2010, was an All-American and drafted by the Houston Astros in the fifth round of the 2010 MLB Draft.

A standout infielder and catcher at Old Dominion University from 1996-99, Folmar led the Monarchs to three Colonial Athletic Association championship game appearances, the 1996 CAA championship and a spot in the NCAA Clemson Regional. He started 168 consecutive games and was a team captain. Folmar earned his degree in health and physical education from ODU in 1999.

Following graduation, Folmar got his coaching start with Young Harris Junior College in Georgia, where he worked with infielders and catchers, along with serving as camp coordinator. The Mountain Lions won 82 games and a pair of conference titles in his two seasons on staff.

Folmar returned to his alma mater, Old Dominion, from 2002-05, leading the infielders, outfielders, catchers and base running while also assisting with recruiting. Among the 15 players he coached or recruited that were chosen in the MLB Draft was Justin Verlander, 2011 American League Cy Young Award winner and Most Valuable Player. Verlander, an eight-time all-star and 2017 World Series champion with the Houston Astros, has racked up more than 200 wins and 2,800 strikeouts in his 15-year MLB career.