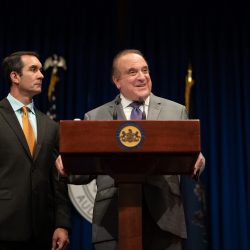 “The Pennsylvania Department of Education’s lack of transparency and accountability was disappointing and surprising regarding the Keystone exams and other standardized tests,” said Dinniman, who serves as minority chair of the Senate Education Committee and is a long and vocal opponent of the excessive and expensive Keystone Exams.

“Pennsylvania spends hundreds of millions of dollars on standardized testing, and in many cases, it isn’t even clear exactly what we’re paying for. Taxpayers have a right to be able to access clear and accurate information on how and why state dollars are being spent and what exactly we are getting in return. I thank the Auditor General and his staff for taking a closer look at these facts”

“My staff and I investigated the bid and contract procurement process,” Dinniman said. “They found needed documentation from the Department of Education missing or muddled, including information on how the contracts were scored and selected, contract amendments, and vouchers.”

Dinniman hopes DePasquale’s report will afford both the public and legislative leaders an opportunity to clearly see the Pennsylvania Department of Education’s ongoing spending activity related to standardized testing. Over the past decade, Pennsylvania and local school districts have either already spent or awarded contracts totaling more than $1.3 Billion for standardized testing. “Just think what $1.3 Billion could have done if it were put into the classroom where real learning takes place,” Dinniman said.

One company alone, Data Recognition Corporation (DRC) of Minnesota, has been awarded more than $741 million in testing contracts. In addition, two of the three DRC contracts were given sole source no-bid extensions. In the 2015-16 fiscal year and the first half of the 2016-17 fiscal year alone, DRC received more than $88 million.

A variety of other companies involved in the assessment and measuring of test scores also received millions of dollars in state expenditures during that same 18-month period. In fact, three companies alone received a total of $19.6 million.

The Auditor General’s report goes hand-in-hand with the Pennsylvania Legislative Budget and Finance Committee’s recent report, Standardized Tests in Public Education, that was generated in response to Senate Resolution 322 of 2018 defining the term standardized tests and identifying the number and types of state and local mandated standardized tests/assessments used in Pennsylvania public schools. Dinniman was a prime co-sponsor of this legislation.

“Both the Auditor General’s report and the PLBFC’s report clearly demonstrate that it’s time to end the Keystone Exams and replace them with the SAT. The result would be positive from an academic and a cost perspective.”

To review the special report on standardized testing visit, https://www.paauditor.gov/Media/Default/Reports/RPT_Standardized_testing_071019_FINAL.pdf.

Use this link to view Data Recognition Corporation’s current contract No. 4400015274 with the Department of Education through the Department of Treasury’s Contracts e-Library, http://contracts.patreasury.gov/View.aspx?ContractID=336296.

This PDF document, compiled by Senator Dinniman’s staff, summarizes the Department of Education’s contracts with Data Recognition Corporation for standardized assessments from 2008 to the present, https://www.paauditor.gov/Media/Default/Reports/PA%20Department%20of%20Education%20Exam%20Contracts%20with%20Data%20Recognition%20Corporation%20-%202008%20to%20present.pdf.

Video of the press conference can be found here, http://www.senatordinniman.com/news/videos.