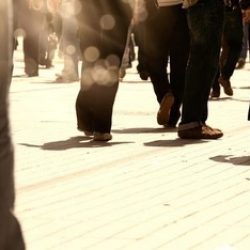 World population is estimated to reach 7.58 billion this month as World Population Day was celebrated on July 11 but the U.S. Census Bureau is projecting another milestone: Annual population growth will slip under 1.0% in 2020-2021 for the first time since 1950.

The Census Bureau’s International Data Base projects 2020-2021 to be the first year since 1950 where the annual population growth rate will drop below 1%.

The U.S. Census Bureau’s International Data Base, which estimates that 7.58 billion people will be on the planet on that day, shows that world population increased by more than 50% in the 32 years since the Day of Five Billion in 1987 (Figure 1).

Now, the Census Bureau shows how we got here and what’s ahead.

From 10,000 BC through the early 1800s, the world population stayed below 1 billion globally. By the 20th Century, population totals soared (Figure 1), more than doubling between 1920 and 1980 from fewer than 2 billion people to almost 4.5 billion in 60 years.

While this growth has been rapid, annual global population growth rate actually peaked in the early 1960s at 2.2%. It has since gradually begun to decline.

In fact, the Census Bureau’s International Data Base projects 2020-2021 to be the first year since 1950 where the annual population growth rate will drop below 1%. That number is expected to continue to drop.

While specific numbers and trends vary between and within nations, Total Fertility Rates (TFR), the average number of children a woman is expected to have, are generally dropping around the world.

Even regions that have traditionally had high population growth are showing similar trends. Their populations are still growing but at a continually slowing pace. In Malawi, for example, the TFR has been dropping for the past 10 years.

In countries like Japan, which have long had declining rates of population growth, the TFR has been below the replacement rate of 2.1 (enough to replace the mother and father in the population) for decades (Figure 2).

How We Keep Track of World Population

Much of the data that allows scientists to study these trends is drawn from national surveys and censuses facilitated through the work of the International Programs team at the Census Bureau.

While the Census Bureau is the leading provider of quality data about the people and economy of the United States, an important part of its mission is to share its expertise globally.

World Population Day provides an occasion to highlight the Census Bureau’s work to improve population data for enhanced decision-making around the world.

One of the ways the Census Bureau shares its expertise is by assisting national statistics offices (NSOs) in developing countries.

Through the support of the U.S. Agency for International Development (USAID), the Census Bureau has been able to work with over 100 countries during the last seven decades to collect and disseminate more accurate and timely population data (Figure 3).

More than 10,000 individuals have participated in its training and capacity-strengthening programs.

Our Work in Malawi

One example is the partnership with the National Statistical Office of Malawi to help them field their first-ever digital census and disseminate preliminary results in record time.

It delivered its preliminary report to the President of Malawi just three months later, the shortest time between enumeration and dissemination in African census history

The Census Bureau’s International Programs staff conducted 21 missions to Malawi in support of all aspects of preparation for the census between late 2016 and late 2018. Staff from NSO-Malawi visited Census Bureau headquarters for study tours and workshops.

The most recent partnership began in 2016 when Malawi requested technical assistance for their census preparations from the USAID Mission in Malawi. USAID asked the Census Bureau to travel to Zomba, the former capital of Malawi, to assess and identify specific needs for the 2018 census.

Using our Tool for Assessing Statistical Capacity (TASC), we were able to measure the overall capacity of the NSO to conduct its census and provide a breakdown of strengths and weaknesses.

TASC results in hand, a three-way partnership was developed: USAID-Malawi, the NSO, and the Census Bureau.

NSO-Malawi is one of the first NSOs in sub-Saharan Africa to collect data using tablets and computer-aided personal interviewing (CAPI) data-capture techniques.

Compared to a traditional paper-and-pencil approach to data collection, CAPI approaches require a high level of skill in information technology and data processing.

The Census Bureau provided training and technical assistance on the Android version of the free Census and Survey Processing System (CSPro). NSO-Malawi ultimately deployed CSPro-Android on over 20,000 tablets for the census.

Upcoming activities will focus on the production of a Census Atlas and the development of an open-source data-dissemination platform, all key activities for transforming data into information Malawi’s decision-makers can use.

Lessons learned from the challenging but successful Malawi census will be applied to Census Bureau partnerships with other countries in the ongoing quest to improve the quality of population data worldwide.

Sam Dupre is a survey statistician and Erik Vickstrom is a demographer, both with the International Programs team at the Census Bureau.