Albright College Co-Directors of Athletics, Rick Ferry and Janice Luck, have announced the hiring of Amber Auchenbach as the new head Field Hockey Coach and Director of Athletic Marketing. Auchenbach comes to Albright following a one-year stint as the head coach at Cedar Crest. 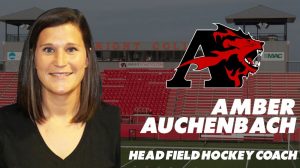 “I would just like to thank the search committee at Albright for offering me this opportunity, especially Rick Ferry and Janice Luck,” Auchenbach said. “I appreciated the time I had at Cedar Crest to help to prepare me for this exciting challenge.”

Last season at Cedar Crest, Auchenbach helped lead the Falcons to a berth in the Colonial States Athletic Conference (CSAC) Field Hockey Tournament for the first time since 2002. She was also named CSAC Coach of the Year, and saw five of her student-athletes earn All-CSAC First Team honors. In addition to success on the field, nine of Auchenbach’s players received NFHCA D3 National Academic squad and one earned honors as a NFHCA D3 Scholar of Distinction.

Prior to her time at Cedar Crest, Auchenbach was an assistant coach at Kutztown for five seasons under the tutelage of Marci Scheuing. She assisted in leading the Golden Bears to a spot in the 2015 Pennsylvania State Athletic Conference (PSAC) Field Hockey Tournament for the first time in six years. Auchenbach’s field hockey coaching has also extended into the club level as she has served as a Level 1 Accredited Coach for Futures, a USA Olympic Development program, and a High Styx Head Coach based out of Leesport, Pennsylvania.

Auchenbach is a 2013 graduate of Bloomsburg University where she completed a decorated career as a member of the Huskies field hockey team for four season. She was a member of the 2009 Division II National Championship team, and three PSAC Conference Championship squads. Auchenbach was a two-time NHFCA All-American, and earned All-PSAC three times in her playing career. She also earned NHFCA National Academic Squad honors in all four seasons as a student-athlete.

“We are thrilled to welcome Amber to the Albright College athletics family,” Luck said. “She has experienced much success in her field hockey career, both as a coach and as a player. That success will be a real asset to our student-athletes as we look to continue the growth of Albright field hockey.”

Auchenbach inherits a program that has reached the MAC Commonwealth Tournament semifinals twice, and has made a pair of ECAC Tournament appearances in the past four seasons. In addition to being responsible for the day-to-day operations of the field hockey program, Auchenbach will also spearhead the athletic department’s marketing strategies.