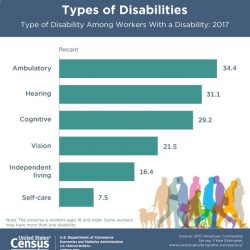 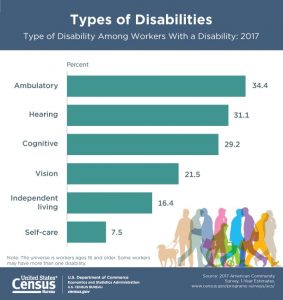 This Facts for Features provides a demographic snapshot of the U.S. population with a disability and examines various services available to them. The statistics come from various U.S. Census Bureau censuses and surveys, covering different periods of time.

The following facts are made possible by the invaluable responses to the Census Bureau’s surveys. We appreciate the public’s cooperation as we continuously measure America’s people, places and economy.

20.2% : The percentage of the civilian noninstitutionalized population in West Virginia in 2017 with a disability — among the highest rates in the nation. Utah, at 9.6 percent, had the lowest rate. Source: 2017 American Community Survey

$23,006 : Median earnings in the past 12 months (in 2017 inflation adjusted dollars) of the civilian noninstitutionalized population age 16 and over with earnings and a disability. Source: 2017 American Community Survey

See a detailed profile on the population with a disability from the 2017 American Community Survey. Statistics include: