Seven Selected to Enter Kutztown Athletics Hall of Fame in 2019 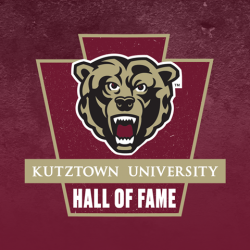 Inaugurated in 1977, the Kutztown University Athletics Hall of Fame will grow its membership to 219 including its newest inductees.

This year’s induction ceremony will take place on Friday, Nov. 8, in the Nancy Jean Stump Seiger ’54 Multipurpose Room in the McFarland Student Union Building. A reception at 5:30 p.m. and dinner at 6:30 p.m. will precede the ceremony at 7:30 p.m. Registration information will be made public when available. Inductees will also be recognized at halftime of Kutztown’s football game against Millersville on Saturday, Nov. 9.

MICHAEL BALDWIN ’05 // FOOTBALL
Michael Baldwin was named to KU’s All-Time Football Team as one of the five best defensive backs in school history. Following his senior season in 2005, Baldwin was named to the Associated Press Little All-America Second Team, two all-region teams and the All-Pennsylvania State Athletic Conference (PSAC) East First Team along with being voted PSAC East Player of the Year.

Baldwin graduated 15th in school history with 203 career tackles, one of 23 Golden Bears in the 200-tackle club. He totaled the fifth-most career pass breakups with 21 and added five forced fumbles, eight blocked kicks and three interceptions. The Philadelphian registered a school-record 98-yard fumble return against Clarion in 2005.

Baldwin, a two-year team captain, was voted the 2006 KU Male Senior Scholar-Athlete of the Year.

Baldwin is a social worker for the Montgomery County Office of Children and Youth. He and wife, Karen, have four daughters: Jayden, Taylor, Madison and Michal.

A team captain and MVP as a senior in 2004, Collins was voted the KU Male Athlete of the Year as a senior. He was a four-year member of the KU Presidential Ambassadors, serving as the Vice Chairman in 2003.

Collins is a business education teacher and head track & field coach at his alma mater, Western Wayne High School, in Lake Ariel. He and wife, Trina, have one son, Richard.

APRIL DOYLE ’13 // WOMEN’S TRACK & FIELD
April Doyle became the first woman in PSAC history to win eight individual championships in one event, capturing the shot put title at every PSAC Indoor and Outdoor Championship between 2010-13. Doyle was voted 2013 PSAC Women’s Outdoor Field Athlete of the Year as a senior after winning her eighth title and was also recognized as the Women’s Outstanding Field Athlete of the 2013 PSAC Outdoor Championships.

Doyle was named the PSAC Freshman of the Year in 2010 following a commanding victory at the Outdoor Championships, in which she outdistanced her closest competition by nearly three feet with a throw of 44-feet, 2-inches. In her final meet as a Golden Bear, Doyle set a then-facility shot put record at Millersville’s Biemesderfer Stadium with a throw of 45-feet, 5-inches to claim the last of her eight PSAC championships.

USTFCCCA All-Region honors were introduced during Doyle’s sophomore season and the Greenfield Township, Pennsylvania native was named All-Atlantic Region nine times over her final three season, including six times in the shot put, twice in the hammer throw and once in the weight throw. Doyle also posted top-three finishes in the hammer (second) and discus (third) at the 2013 PSAC Outdoor Championships to become a 10-time All-PSAC thrower. She continues to hold both the indoor and outdoor shot put records at KU and also ranks seventh on Kutztown’s Outdoor Top 10 in the hammer.

Doyle is employed as a selector by Wegman’s.

JOHN FROWNFELTER ’00 // MEN’S TRACK & FIELD
John Frownfelter collected back-to-back All-America honors in the weight throw in 1999 and 2000 and was a four-time Eastern College Athletic Conference (ECAC) champion in throwing events. He won three conference crowns in the weight throw and doubled up in 1999 by also winning the shot put. Frownfelter, of Blain, Pennsylvania, was part of six Kutztown championship teams, including four straight ECAC Indoor Championships from 1997-2000, and the 1998 and 2000 PSAC Outdoor Championships.

Frownfelter is the managing director for institutional investment solutions at SEI. He is a chartered financial analyst and member of the Philadelphia Society of CFAs. Frownfelter and wife, Angela, have two sons, Logan and Tyler.

SHAYNE HOUCK ’16 // BASEBALL
One of the best hitters in Kutztown University and PSAC history, Shayne Houck is also among the most decorated as a two-time PSAC Athlete of the Year, 2010 ABCA Atlantic Region Player of the Year and 2010 NCBWA All-America First Team selection.

Houck, a Boyertown, Pennsylvania native, graduated with 13 school records that have yet to be broken. A career .389 hitter for the Maroon and Gold, Houck holds the PSAC’s single-season record with 74 runs scored in 2010. He ranks among the conference’s career leaders in most major offensive categories.

As a freshman in 2009, Houck was voted PSAC Rookie of the Year. He went on to earn All-PSAC and All-Atlantic Region First Team honors in each of his final three seasons. Houck played outfield and third base and his play was at the forefront of one of the most successful eras in KU baseball history.

Kutztown posted a 134-69 record (.660) over the course of Houck’s four years with the team. The Golden Bears advanced to, and hosted, NCAA Championship tournament games in three of his four years, winning the Atlantic Region title and advancing to the National Championships in 2010.

Houck remains the program’s most recent All-American. He was selected by the San Francisco Giants in the 29th Round of the 2012 Major League Baseball First Year Player Draft. He played two years in the Giants organization, advancing to Class A in 2013.

Houck spent the 2014 season as a member of the Frontier League’s Evansville (Ind.) Otters, where he batted .307 while hitting 23 homers and driving in 66 runs on his way to being named the league’s Most Valuable Player.

Rawa graduated as the Golden Bears’ all-time leading goal scorer and ranked second in career points, just one behind teammate Margaret Daly. Following the 1990 season, KU’s program went dormant until 2008. Rawa held the program’s career goals record for 30 years –and better than 10 seasons after its relaunch– before it was surpassed in 2018.

A native of Hilltown, Pennsylvania, Rawa supplemented her record-setting goal total with 32 career assists, which still ranks tied for seventh in program history. Rawa was named All-PSAC First Team in 1987 and 1989.

Rawa was the first KU player to eclipse 100 career draw controls, finishing with a then-school record 103. She remains among the Golden Bears’ leaders in that category, currently ranking sixth. Rawa appears on a number of KU’s single-season and single-game leaderboards. Her six assists against Widener in 1989 remain a KU single-game record.

Lisa is married to Jim Morgan and the couple has three children: Kelsey, Daniel and Sierra. She is an office manager for Dentistry With a Touch of Art.

Originally from Lititz, Pennsylvania, Singer was a six-time All-PSAC performer, capturing all-conference honors in the 200 and 500 free at the 2006, 2007 and 2008 PSAC Championships.

Singer achieved All-America honorable mention finishes with an 11th-place showing in the 200 free and 12th-place finish in the 500 free in 2007. She also qualified for the national meet in the 1000 free as a junior, taking 22nd.

Ashley is married to Andrew Garrett. They have two daughters: Addison and Ava. She is a first grade teacher in the Hempfield School District.