Fisher and Hoffman Voted 2019 Kutztown Coaches of the Year 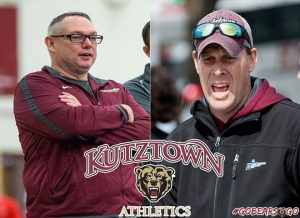 It is the second consecutive year that Fisher is recognized as a coach of the year, last year earning women’s Coach of the Year honors in leading women’s golf to its first ever Pennsylvania State Athletic Conference (PSAC) championship. This year, Fisher brought home hardware once again, guiding the wrestling team to its first team title in program history. It is his third Coach of the Year for wrestling, having won it back-to-back years in 2014 and 2015.

Fisher secured his 200th career dual win on Jan. 12, 2019, against Ferrum in Hampton, Virginia. Dunn Jr., Reimel and Warner all won Super Region I championships, while Joe Renne (Great Meadows, N.J./Hackettstown) (125 lbs.) qualified for nationals with a third-place finish. Fisher’s squad finished No. 7 in the final NWCA Division II Top 25 and has produced at least one All-American 12 seasons running.

Hoffman is awarded his first Coach of the Year honor in track and field after previously winning twice for women’s cross country in 2001 and 2002.

The Golden Bears also had a successful outdoor season with a fifth-place finish at the PSAC Championships, the program’s highest since taking second in 2013. Groth earned two more school records in the 100m (11.96) and 200m (25.21), while Megan Kirn (Philadelphia, Pa./Archbishop Ryan) posted a new program record in the javelin by throwing 151-feet, 7-inches. Kirn qualified for the NCAA Division II Championships in Kingsville, Texas.

Members of the KU athletic department staff voted on the nominees to determine KU’s year-end awards.