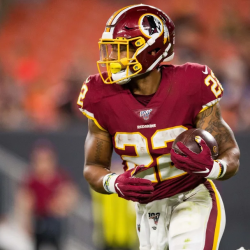 KUTZTOWN, Pa. — Kutztown University alums Craig Reynolds ’18 and Jordan Morgan ’16 got their first chances to impress their new National Football League organizations as the opening week of preseason games wrapped up this past weekend.

Reynolds earned a free agent contract with the Washington Redskins back in May following a successful showing at the team’s rookie minicamp. The running back has continued to turn heads in training camp and debuted on the opening play of the second half during Washington’s 30-10 loss at Cleveland last Thursday night. Reynolds paced the Redskins in rushing yards (21) and carries (nine), while also catching his only target for five yards.

Morgan, an offensive lineman, signed with the New York Jets in February. The 2017 fifth-round draft pick totaled 26 snaps (37%), third-most by a Jets guard, while playing the entire second half in a 31-22 setback to the New York Giants at MetLife Stadium last Thursday. Morgan helped lead the way as the Jets drove 68 yards on 15 plays to cap their final possession with a two-yard touchdown pass from Luke Falk to Greg Dortch with 14 seconds remaining.

The NFL preseason carries on this week with the Jets traveling to Atlanta to take on the Falcons, and the Redskins hosting the Cincinnati Bengals. Both games are scheduled for Thursday, August 15, at 7:30 p.m.